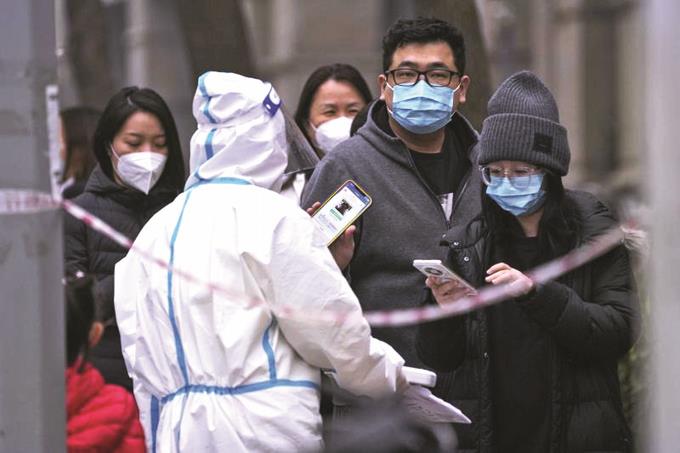 China’s highest security body called for “strong measures” on Tuesday after several days of protests in the country’s main cities to protest against strict sanitary confinements and to demand greater freedoms.

Security forces are deployed across China in the face of demonstrations the likes of which have not been seen in decades, sparked by strict COVID-19 lockdowns and public frustration with the political system.

In a statement, the Communist Party’s Central Political and Legal Affairs Commission, China’s top security body, said it is “necessary to crack down on the infiltration and sabotage activities of hostile forces in accordance with the law.” according to a report of a meeting published by the state news agency Xinhua.

Currently, only 65.8% of the population over the age of 80 are fully vaccinated, according to the National Health Commission.

The limited vaccination coverage of the elderly is one of the arguments of the communist government to justify its strict health policy, which materializes in endless confinements, quarantines upon arrival from abroad and almost daily tests for the population.

The improvement in vaccination rates could offer China precisely a way out of its “zero covid” policy.

In force for nearly three years, this policy was the target of popular ire in demonstrations this weekend, the largest since the 1989 pro-democracy movement.

By way of context, the frustration of many with the Chinese political system also influences. Some even called for the resignation of President Xi Jinping, recently elected for a third term.

The triggering element was a deadly fire last week in Urumqi, capital of the Xinjiang region (northwest).

The work of the firefighters would have been hampered by health regulations, arguments that the government denied on Monday.

Last Tuesday night, the heavy police presence seemed to have lightened on the streets of a rainy Shanghai. Although the anger was still just as alive.

“The current policy [de cero covid] it’s too strict, and it kills more people than the coronavirus itself,” said a 17-year-old bystander, who asked to be identified only as Ray. At Hong Kong’s oldest university, a dozen people led a crowd yesterday chanting slogans such as “give me freedom or give me death.”