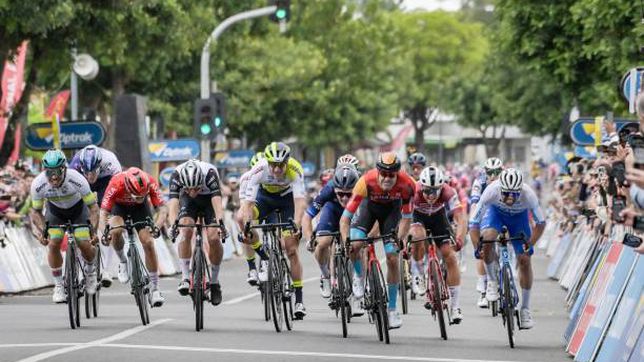 Nerves and tension have been the main protagonists of the first online stage of the Tour Down Under. A day in which the German Phil Bauhaus managed to take the victory to the sprint after a stage marked by crashes in the peloton but which did not prevent Alberto Bettiol from maintaining the overall lead.

After yesterday’s prologue in Adelaide, the peloton faced a 150-kilometre route this Wednesday starting and ending in Tanuda. A day that in its first kilometers had a solo adventure of the French Nans Peters, who managed to have 4:30 before being neutralized by the peloton with 55 kilometers to go and after a fall in the group.

With the exception of Michael Matthews in the intermediate sprints and Lucas Plapp in the two passes of the mountain pass, the leading role in this final stretch of the race was for a fall 20 kilometers from the finish line that left Robert Gesink as a great victim, who had to abandon.

A tension that was also noticeable in the last kilometer with a crash in the middle of the peloton but that did not prevent the sprinters from risking victory in a volley in which Phil Bauhaus beat Caleb Ewan and Michael Matthews to add his first stage victory this season before two tough rivals. This Thursday, the second straight stage of the Tour Down Under with 155 kilometers between Brighton and Victor Harbor in which the steep slopes of the final section could prevent a massive sprint.

Classification of the first stage of the Tour Down Under

General classification of the Tour Down Under after the second stage

Jasikevicius: “I’m disappointed to have played so badly”