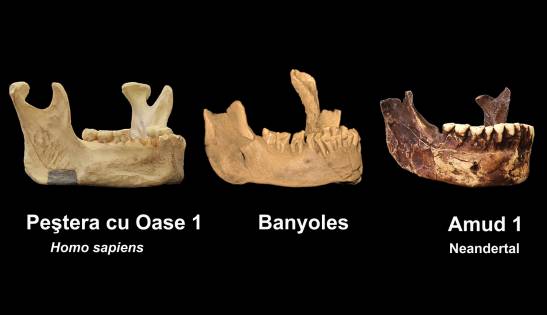 The mandible of Banyoles (Girona) belonged to a Homo sapiens that inhabited this area of ​​the Iberian Peninsula between 45,000 and 65,000 years ago, so it could be the oldest bone trace in Europe attributed to an anatomically modern human. This is what a study published this week in the scientific journal Journal of Human Evolution indicates, in which scientists from the United States and Spain participated.

As it was thought that at that time Europe was occupied exclusively by Neanderthals, the jaw was attributed to this fossil species, despite its morphology not being that of a typical Neanderthal.

Among the authors of the work is the scientific director of the Museum of Human Evolution (CENIEH), Juan Luis Arsuaga.

The Banyoles jaw was discovered in a quarry in 1887 and has been studied by different researchers ever since. The fossil has been dated between 45,000 years ago and 65,000 years ago. As Europe was thought to be occupied exclusively by Neanderthals at that time, the Banyoles jaw has been attributed to this fossil species, despite its morphology not being that of a typical Neanderthal.

In the new study, which uses CT imaging, the missing parts of the fossil were reconstructed on the computer. In this way, it was possible to obtain a three-dimensional virtual model that was compared with other fossils through a technique known as Geometric Morphometry.

Arsuaga is categorical as to the species to which Banyoles’ jaw belonged: “It is not a Neanderthal. It is in almost all of its morphology a modern human. However, the existence of a chin (chin) is not appreciated, so it cannot be ruled out that it has some Neanderthal ancestry. The oldest Homo sapiens fossil in Europe to date was Pestera cu Oase 1 in Romania, but we claim that Banyoles is older.”

The authors point out that the taxonomic reassignment (species change) they propose for Banyoles could be verified through ancient DNA analysis or proteomics.

The authors of this study add that “the taxonomic reassignment (species change) they propose for Banyoles can be verified through ancient DNA analysis or proteomics.”

The authors intend to make the CT and 3D model of Banyoles available to other researchers so that they can include them in future comparative studies, promoting open access to fossil specimens and the replicability of scientific studies.

Reassessment of the human jaw from Banyoles (Girona, Spain). Journal of Human Evolution (2022).