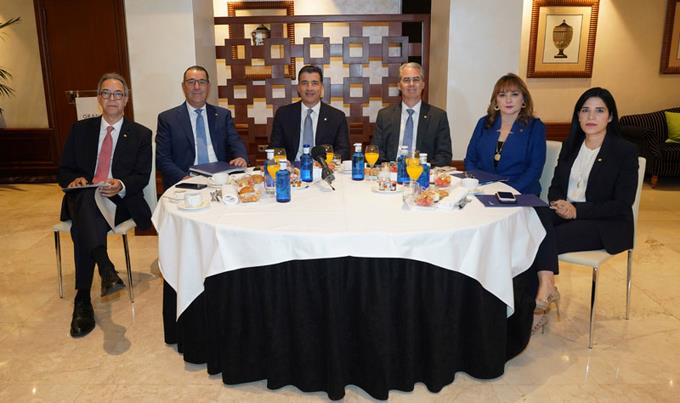 The executive president of Banco Popular Dominicano (BPD), Christopher Paniagua, revealed that they work closely with other financial entities “and sometimes in joint projects” with other colleagues, as part of their commitment to the development and growth of the country and to support its clients in the diversification of tourism in different areas.

Paniagua revealed that greater interest is being observed in different areas of the country, regardless of the fact that “the anchor of tourism for many years has been Punta Cana, Bávaro and Uvero Alto”, areas that tourists want to continue visiting.

He indicated that a special interest is being seen in Miches, where the BPD financed the first hotel, the Club Med, in addition to other projects in that municipality, some in Puerto Plata and also in the Southwest, specifically in Pedernales, as well as in the cities Santo Domingo and Santiago de los Caballeros, where they are financing a hotel.

In this regard, René Grullón, BPD’s executive vice president of national and international business, reported that the Santiago hotel will be ready next year and that there are two others for Santo Domingo, as well as another to complement the room proposal.

The bank executive stated that they are very attentive to what is happening in the south of the country and that clients are looking for support, there are good expectations in Miches and other areas are being developed in Manzanillo, Monte Cristi.

Grullón affirmed that when the Cabo Rojo-Pedernales project is going to be developed, there will be hotels and that offer of rooms has good potential. In Uvero Alto they are also financing a hotel.

He assured that the world is gaining momentum, a position that was supported by the other executives, especially in the country and in all sectors of the economy in general, such as free zones, exports and remittances.

Paniagua and Grullón spoke during the traditional BPD institutional breakfast with the country’s media, in Madrid, Spain, as the first activity of their participation in the International Tourism Fair (Fitur 2023).

“The good news, Cándida, is an investment in different areas, diversified, in different types of projects, of size, city, beach, and we are also seeing sustainability tourism based on ECO,” Paniagua specified.

He stressed that there are opportunities, “we are doing well and we are going to support our clients to make these transactions and investments a reality.”

The bank executive revealed that in the last eight years the BPD has financed more than US$1.6 billion that have facilitated the construction or remodeling of 15,000 rooms and have provided direct and indirect jobs for the benefit of more than 28,000 people and their families.

He said he was very proud to hear how well investors speak of the Dominican Republic and the effort made by the Government, after highlighting the importance that the bank gives to tourism. He said that for three decades they have seen the sector “as a cornerstone in development and it has been so, without any doubt.”

He indicated that the country is experiencing significant macroeconomic stability. He praised the support of the Central Bank and the Superintendency of Banks with the measures adopted during the pandemic, with the storm Fiona and with the war in Ukraine, “and that cannot be underestimated.”

In this context, he stressed that the Dominican economy is one of the fastest growing, not only in Latin America, but in the world.