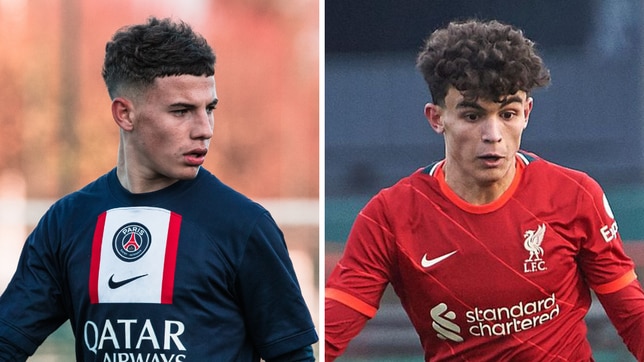 In the absence of six months to start the next European Sub-21which is celebrated in Georgia and Romania between June 21 and July 8, Spain It has found itself, almost unintentionally, with two reinforcements of guarantees. Stefan Bajcetic and Ismael Gharbi, both born in 2004, they have made a gap in the rotations of two European giants such as Liverpool and PSG, respectively, and they are buying tickets to be part of La Rojita in the next continental tournament.

Despite the fact that both players are still Under-19 and that in recent months they were part of La Rojita in that category and in the Under-18, lThe absence of the two footballers in the last concentration of the Under-19 leaves the feeling that the federation has bigger plans for them. Bajcetic has played three Champions League games and four Premier League games with Liverpool this season (the last one as a starter against Chelsea, no less) and Gharbi has made his debut with PSG in Ligue 1, French Cup and is fully involved in the dynamics of the first team despite having a subsidiary file. Both Klopp and Galtier count on the two young promises of the National Team for their daily work, a background that makes it easier for them to open the doors of the Under-21, where in recent years it has been taken into account that the players called up play in professional categories.

Another reason to think that Bajcetic and Gharbi could be part of the Under-21 soon is the election of Santi Denia as the new coach of La Rojita. The coach knows both players perfectly after having led the Under-19s in recent years. In addition, if Denia decides to call them for the first time for the Sub-21, the RFEF would slam the door almost definitively on the dual nationality debate. Gharbi was born in Paris and has played some matches in the youth ranks of France, while Bajcetic, born in Vigo, has Serbian origins (his father was the footballer Srdjan Bajcetic) and has been tempted by the Balkan country’s federation to play with Serbian. Even so, heThe two footballers have already let the Federation know that their intention is to play with the Red and they do not think of wearing the shirt of other countries.