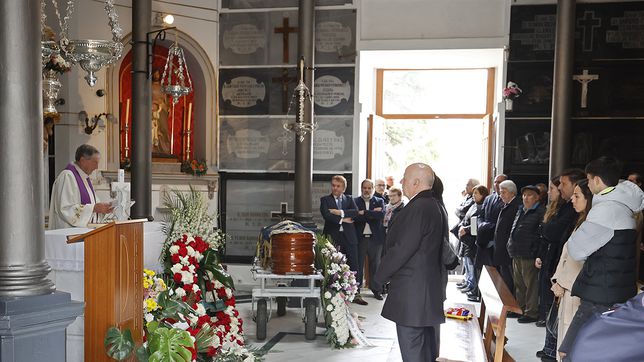 Football gave him this morning the last goodbye to Lázaro Albarracín, the vice president of Atlético who died yesterday at the age of 93, a respected and loved figure throughout the world. Enrique Cerezo, president of the club, and Miguel Ángel Gil Marín, CEO, were present at the mass and subsequent burial in the sacramental of San Lorenzo and San José, just a few streets away from where the Vicente Calderón stood. But they were not the only ones.

Ángel Torres, president of Getafe, Raúl Martín Presa, of Rayo Vallecanowere also present, as well as rojiblancos directors such as Miguel Pérez or Antonio Alonso, as well as former players such as Movilla or Antonio Lopez or former coaches like Fernando Zambrano.

“100% of the players loved him,” summed up Roberto Solozábal, president of the Atlético Legends Association on the afternoon of Lázaro’s death. And not just the players. All football. Close, polite, friendly and always very aware of the social area, of the rojiblancas clubs, that of Lázaro is a figure that transcended. There have been numerous condolences and condolences for the loss of him.

Born in Lorca, Murcia, a town where he was born in 1929 and inaugurated a square named after him in 2016, his military service in Madrid at the age of 20 changed his life forever. Atlético became his center, accompanying him on every trip and displacement. In 1987 he joined the board of directors but always under that essence: Atlético for and for everything. In fact, his last wish was clear: to be buried with a red and white flag. Rest in peace.