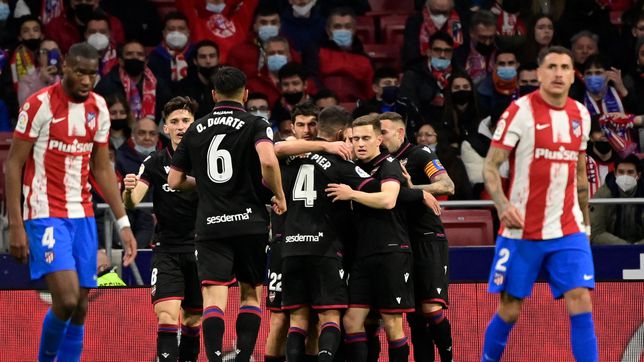 The round of 16 of the Copa del Rey have brought Atlético a duel that this season they thought they had avoided: His rival will be Levante. And the rojiblancos choke especially. He has beaten him ten times between the League and the Cup, with some victories that stung. Like the 2-0 at the Ciutat in 2013-14 that pushed Atleti to have to play for the title on the last day at the Camp Nou… seven days before the Champions League final against Madrid in Lisbon. Or like the 2-1 in 2015-16 that got the rojiblancos out of the fight for the League title that they were playing against Barça and Madrid. Now Levante and Ciutat appear again, this Wednesday (9:00 p.m.) in the Cup, in a season that once again brings more cold than heat for the rojiblancos. A year ago, precisely, they hit rock bottom in the second round League match, at the Metropolitano, against Levante.

The Valencians arrived bottom, the rojiblancos with an erratic course, out of the Champions League positions, with seven defeats in the 24 league games already played. The one for Levante was played on February 16, although it corresponded to matchday 21, then postponed due to Atlético’s participation in the Super Cup in Riyadh, Arabia. It was Wednesday and it was cold in the Metropolitan. And Levante would leave even more: they won 0-1, a goal from Melero, the rojiblancos powerless, unable to even finish off on goal. Two days later Miguel Ángel Gil, CEO, and Andrea Berta, sports director, they would meet with the coaching staff and the squad before the evening training session at Cerro del Espino prior to the weekend’s match against Osasuna, an emergency visit, with a concept in his mouth: The League of 14.

That league of 14 that became a burning nail, a plank to cling to in the midst of the shipwreck. Those were the games that the rojiblancos had left in the competition to fasten the original objective, to qualify among the first four, in one of those positions that give access to the next Champions League, the economic foundation of the club. El Cholo shook their slate at El Sadar (Carrasco back, Llorente in his place, Herrera in the center, João and Suárez up, Correa and Griezmann waiting from the bench) and Atlético won, beginning to leave the shadows behind.

They did not lose again until a month and a half later, when they did so against City, in the first leg of the Champions League quarterfinals (1-0), after eliminating United in the round of 16 and stringing together five league victories (Celta, Betis, Cádiz , Rayo and Alavés). Now they meet again in the Cup, that tournament that has become the only competition that the rojiblancos cling to to smile throughout the season. They will play for life and death in the Ciutat, where Cholo has only won two games (20%) out of ten. A Levante, by the way, that has not lost since October 9, 2022, fourteen days ago.