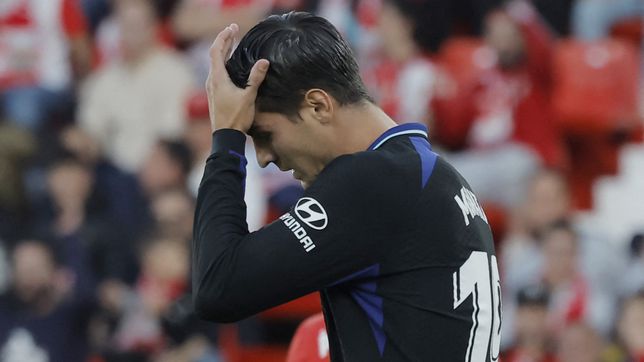 That goal that never went on the scoreboard changed the game forever. Because before that ball emerged from Llorente’s boot looking for a net, Atleti was the team that commanded and dominated on the grass and the light. Because afterwards it was gibberish, entangled in the fears of Cholo and his steps back, so flimsy that he has become a caricature of himself, always stamped on a wall that is no longer his, the opposite. Sadly. Clearly.

Simeone jumped without João to combat his many other problems. That the afternoon was clear in Almería, under that winter sun that is its own season: it can shine but it doesn’t heat. For the rojiblancos, not only are Barça and Madrid far away, but Real is escaping. And chasing his halo, those from Cholo came out, against a solid Almería even though he gave them the ball like someone who gives you a grenade. If Witsel propped up that defense without Giménez or Savic along with a Hermoso, Reinildo and Nahuel who made it unprecedented, it was the last one who stood out in one area and the opposite, sweeping, searching. Ordered 4-1-4-1, Atleti ripped the ring off Rubi’s gift at the first shot.

A 4-1-4-1 that enhanced Llorente’s stride and in which grizi did and undid. Heading here and there, attracting inside and escaping outside, generated play behind Samu. The Power Horse was a garden. Soon Correa joined. That Correa who, without João and without a substitute at the moment, appeared with his supernatural impetus to change things: he had the ring in his teeth when Fernando’s net rang boom. He slipped the ball between his legs, the one that grizi he served it without touching it, just moving to let it pass. The Frenchman is not just about brightness, it is what João lacked: regularity.

Atleti was able to enlarge the wound fifteen minutes later. Almería still looking at the blow and Llorente runs down the wing, leaving trails and rivals down. He first led a counterpunch that went through Lemar before faltering on Correa. He then sent a shoe from the front that flew like a silver bullet straight into the net. But Kondogbia came up with the idea of ​​putting his toe in at the end so that it is not very clear what. Maybe to write it down. Perhaps because she did not see that she was already entering alone. She was offside. And that goal that never went on the scoreboard, the 0-2, would end up being a shot in the foot. Simeone immediately left his bench with the usual chant. “Five-three-two” he drew with his hands to disconnect himself from his team. Atleti took a step back. Almería, two ahead.

Akieme warned first, then Embarba and Baptistao, but it would be the fourth when Robertone pulled Witsel’s seams with a lateral center: Bilal Touré holed him out with a header. 1-1. Cholo’s fears wrote his letter to João. “Everything is the same around here.” He attached a photo of these minutes. weeping off, the Atleti made a gibberish, twisted and squinting with the complaining air of a hangover on a Sunday. He has been dragging her for two years. And it does not pass, and it does not end.

without order, without sense

When the game returned, Almería still had the energy. Simeone tried to recover it with Barrios. Koke, very slow, was left out, something increasingly common. But yesterday neither the kid. Atleti had taken so many steps back. Robertone served, El Bilal Touré danced with danger in each boarding school. Reinildo reduced, saved on the line. When reinforcements arrived, Atleti showed that their lack of skill kills them.

With cons on one side and the other, Fernando looked gachetobrazo. Twice he denied Morata a goal, once to Correa and another grizi. Merit his saves, demerit that rojiblanca lack of aim that begins to pull his feet down the table. The game would end with Felipe, red to Reguilón in 4 ‘and the feeling of failure in the mouth despite the point that he makes up. The post-Qatar revival was a lie. She’s already gone, it’s over, like João. The season for Atleti continues to be an open jaw. Clearly. Dangerously.

Kering: creation of a Beauty division headed by Raffaella Cornaggia