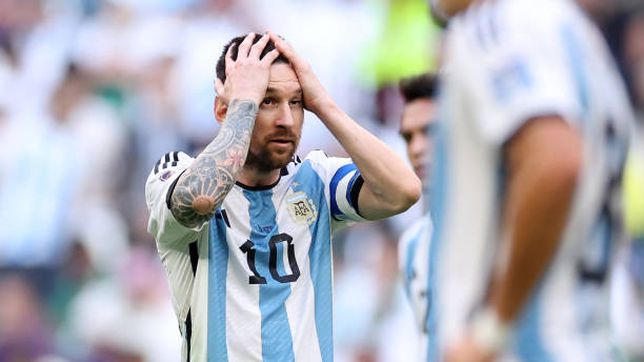 The history of the World Cups wrote another epic, unpredictable page, a feat by Saudi Arabia over Messi’s Argentina, the team that everyone pushes to bring the 10 closer to where it has never been before. Two goals from the Saudis and a millimeter application of the offside led to a victory and a comeback that no one will be able to erase. Since Italia 90, the Albiceleste has not lost in a World Cup debut. In that case it was before Cameroon, another Cinderella.

And that things started completely backwards. Argentina had not stopped humming the anthem when the referee Vincic was alerted by the VAR. No one saw anything flagrant except one man, Paulus Van Boeke, from the Netherlands, who, sitting in the video referee chair, decided that it was his moment of glory. The images revealed a grab that Paredes turned into a firing squad, one of those sticky markings that football can live with but the VAR cannot.

An entrance tribute for Messi. The penalty was converted by Leo almost giving thanks. It is the fourth World Cup in which he has scored, thus equaling Cristiano, Klose, Uwe Seeler and Pelé. With Papu Gómez thrown to the left side, Di María cornered to the right and Paredes and De Paul managing the team, the Argentine star found space inside to float where he likes best.

However, what seemed like a rose garden for Argentina was also being complicated by technology, which makes no friends with anyone in this very traditional sport. It was the semi-automatic offside that made the Albiceleste despair. FIFA’s new little toy took three goals from him before the break. First to Messi and then twice to Lautaro.

The candy of the Saudi advanced defense served as a net to fish the Argentines, sometimes by several meters -others, instead, by millimeters-. The forward position detection system fumed. FIFA invented it to make football fairer. Taken to the limit, it turns justice into a microframe that outrages more than helps.

The World Cup is not used to these revolutions or to challenges like the one that Saudi Arabia proposed after the break. Playing hard, with the intensity that a match like this required, he wrinkled Argentina and led him into a labyrinth. The physical problems of Cuti Romero cost the tie, in fact. The Tottenham center-back was not good at defending Al Shehri and his left-footed shot slipped into the Dibu Martínez goal. Madness broke out.

Little compared to Al Dawsari’s great goal just five minutes later, in full turmoil, with the stadium turned into a small Riyadh and the Albiceleste returned to that of those discreet years ago. His shot by the squad activated the Argentine alarms and those of a confused, pensive, unhappy Messi.

Scaloni moved quickly. At once he introduced Julián Álvarez, Enzo Fernández and Lisandro Martínez, forced by Cuti’s injury. The ghosts appeared again. Argentina felt like in previous World Cups. The spotlights focused on Messi, on his ability to react, on what he has been accused of lacking so many times and others did have.

Saudi Arabia continued to play with a very advanced defense, an invitation to deep passes but also a trap that the Argentine midfielders never understood. The stands vibrated. The thousands of Saudis who had crossed the border to also see Messi were excited about the feat, with the miracle.

Argentina tried it without disturbing, stunned, impotent. The Argentina that came to win the title, the one from Messi’s fifth World Cup, the one that wants to take its captain where he has never been before, the one that many consider to be a candidate, He hit it with a bang at its premiere. A match for history, a result to remember. A debacle that puts Messi and his teammates on the wire. Incredible.

Shootings, deaths in the US on the beginning of the Chinese year