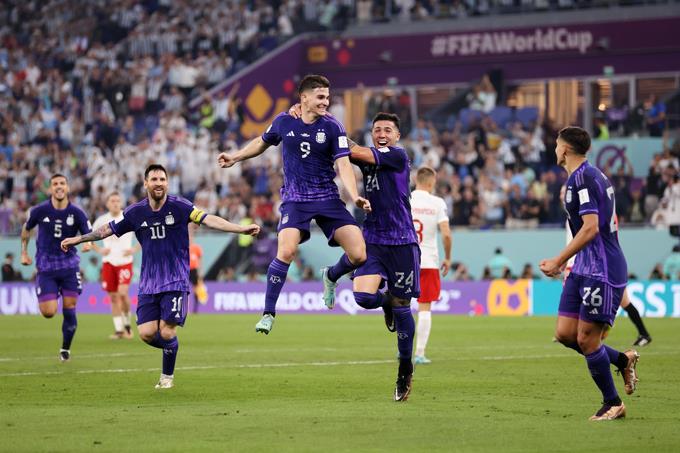 Argentina confirmed its recovery and defeated Poland 2-0 on Wednesday, getting the ticket to the round of 16 of the World Cup in Qatar and also as leader of group C, in a match in which Lionel Messi had missed a penalty.

Getting the lead in the key also has an added prize for Argentina, which will face Australia on Saturday in the round of 16. If they had been second, they would have had to face France in that round, their executioner from the previous World Cup and who will be a rival to Poland, who despite the defeat also qualified.

After Messi missed a penalty on the brink of half-time with a provisional 0-0 draw, Alexis Mac Allister led the way to victory in the 46th minute and Julián Álvarez in the 67th minute.

After the bump in the debut against Saudi Arabia (2-1 defeat), La Scaloneta was able to return to the right path with 2-0 victories against Mexico and Poland, to end up winning their group with 6 points.

The other qualifier for the round of 16 is Poland (4 points), who will play on Sunday against France, while Mexico (also 4 points but worse goal difference) was third after beating Saudi Arabia 2-1 (4th, 3 points) in a duel after which both are eliminated.

Messi had scored in the first two days, but this time he could not add, on the night in which he became the Argentine who has played the most games in a World Cup, with 22, leaving behind the equality of 21 that he shared with Maradona and the one that had arrived last Saturday.

In any case, the Paris Saint-Germain star could breathe a sigh of relief and celebrate that Argentina avoided the disaster of an elimination in the group stage, something that only happened to him three times in his history, in Sweden-1958, Chile-1962 and in the most recent one with a team then led by Marcelo Bielsa, in South Korea/Japan-2002.

Poland was able to console themselves with their first qualification to the World Cup round of 16 in 36 years, since the previous one in Mexico-1986, despite the fact that their star Robert Lewandowski went unnoticed this Wednesday at the 974 stadium in Doha.

Szczesny is not enough
It didn’t take Argentina long to see that it was going to be difficult for them to find spaces in the first half hour, although from then on they increased the pressure.

In minute 28, a dangerous shot in the area by ‘Araña’ Álvarez was cleared and in minute 33, Ángel Di María was about to score an Olympic goal, directly taking a corner, when his ball dangling from the corner was poisoning and Szczesny cleared just in time.

The Juventus goalkeeper saved his team by repelling the ball in a face-to-face with Álvarez (37) and, above all, when he saved Messi’s penalty in the 39th minute, which he himself had committed against the Paris Saint-Germain star and that it was whistled after a review in the VAR.

In minute 43, a dangerous shot from the edge of Álvarez was repelled by an omnipresent Szczesny, who also saved Rodrigo De Paul’s attempt on the rebound.

In the second half, Argentina did not take long to strike the first blow, taking the lead with a cross from Nahuel Molina that Mac Allister (47) crossed in the area, close to the post and out of Szczesny’s reach.

La Albiceleste, who played with the purple kit, released the pressure and sentenced shortly after.

Mac Allister was close to the second in minute 61 but peace of mind came in minute 67, when Enzo Fernández assisted Julián Álvarez, who sent a shot in the vicinity of the penalty spot to help make it 2-0.

Messi, in 71, crashed a new shot into the hands of Szczesny. Lautaro Martínez, who started as a substitute, crossed too much in minute 86.

Poland knew that Mexico was winning 2-0 in their match (in the end it was 2-1) and that the 2-0 loss to Argentina still classified them. He entrenched himself, resisted without the disadvantage being wider and Lewandowski will accompany the Argentines until the next round.