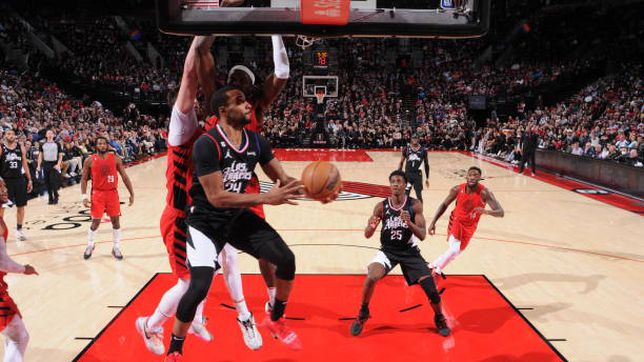 In a Western Conference in which nobody shines, but almost everyone competes, it is still strange that, after less than 25 games played, a team that is ranked fifth is only 2 victories away from the lead. This is what happens to the Clippers, who have added their first victory in Oregon after two straight losses, but the fifth in seven games to continue rearing its head. They don’t finish doing it, but they always give the feeling that they can exploit and dominate a Conference that nobody dominates: the Suns, with 14.6, are leaders; the Nuggets are second (13-7). And Grizzlies and Pelicans, in the following positions, They are already in a technical tie with the Angelenos (12-8 for them, 13-9 for the Clippers), who open some distance with some Kings (11-10), more irregular.

The victory against the Blazers was forged in a spectacular last quarter: they were losing 95-82, they went to the final 112-118, a 36-17 run in which they showed where they can go, leaving their rivals in a poor 6 of 20 in field goals and 2 of 10 in triples. Of course, the attack had names and surnames: Norman Powell. The guard carried out an extraordinary shooting exercise and absolute precision to go up to 36 points… 22 of them in the last quarter, in which he achieved 7 of 9 shooting from the field and without missing a triple (2 of two). A fantastic revulsive in the absence of Kawhi Leonard (who has been sidelined for three straight games) and Paul George (four). Two men whose well-known physical problems make us think that this is already a constant and not an asterisk. And the Clippers, who can play very well without them, know it through the work and grace of a Tyronn Lue who does not lack intelligence.

Powell’s exhibition, set up in just 24 minutes of play, was accompanied by very good moments from Reggie Jackson (23+7, with 14 assists), 12+13 by Ivica Zubac, who continues to rebound very well; and 3 of 4 in triples for 15 points from a Robert Covington who gives a lot of security from the bench. The Blazers, very diluted without Damian Lillard, had Afernee Simons (37 points with 9 of 16 in triples) Jerami Grant (32) and double-doubles by Nurkic (13+10+7) and Winslow (10+13). But they showed their defensive weaknesses in a last quarter in which they did not know how to manage their advantage first, or react at the end. They started, let’s remember, the season 4-0… and they’re already 11-10. There it is.

Unopposed walk of some Knicks who add up in Detroit (they go 10-11) and advance a little in an Eastern Conference in which they see the top positions from far away (for now, tenth). The Pistons are a drifting team that seems to be thinking about the next season since the current one began. (or in Victor Wembanyama, of course) and they do not plant opposition: 5-18 and another three consecutive defeats are their current streak. Against the Knicks, they had 7 players with double figures, but they were a shadow on defense, they allowed many easy points and they came to lose by 32. On the part of the New Yorkers, at a better time than their rivals today but not at all positive, Julius Randle was exhibited with 36 points and Jalen Brunson went to 16, the same as Quentin Grimes and RJ Barrett. A victory that gives them some peace of mind after tumultuous weeks within the franchise, which has a near future full of uncertainty.

Felipe Orts and Lucía González, leaders of Spain in the Cyclocross World Championships