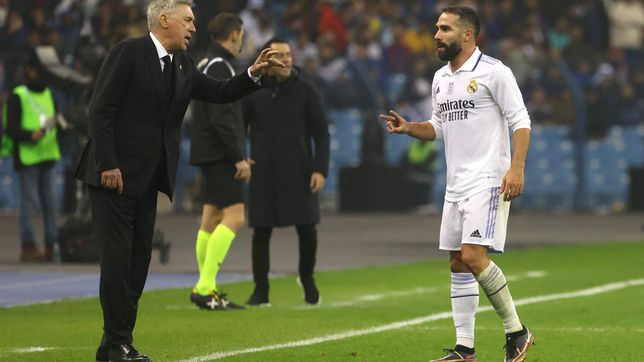 Real Madrid suffered a severe correction in the final of the Spanish Super Cup (1-3) from Barcelona, ​​much better throughout the 90 minutes. Courtois was the only one who gave the level: he could do little in the three Barça goals and avoided a few more. Benzema took an insipid prize in the prolongation, the defense failed in a chain and Vinicius returned to show a harmless and somewhat lazy version in the pressure.

Courtois: important so that Madrid did not leave with greater damage at half-time. Saved from Lewandowski’s first shot, deflecting it to the post. In the two goals in the first half he could do little: Gavi beat him with everything in his favor and Lewandowski finished off practically on an empty goal. He started the second half with another miracle: he kicked out Dembélé’s 0-3. And another one later, at a shot from Lewandowski with very little angle. He could not prevent Pedri’s third from arriving, in which he was also sold.

carvajal: Outclassed in the first half, with problems running after Balde and missing both goals. In the first, Gavi ate the toast to introduce himself to Courtois. And in the second, he jumped on the pressure with Militao, but neither of them caught the ball and they created a huge hole for Gavi to assist Lewandowski. Little depth in attack, he is not physically and it shows. Neither technically, they cost him even the controls. At the start of the first half, Balde portrayed him at speed in a play that ended with a shot by Dembélé and a saving save by Courtois. With 0-3, in minute 72, Ancelotti decided to plug that hole and took him off the field to put Nacho in.

military: He missed both Barcelona goals in the first half. In the first, he did not make the diagonal that Ancelotti insists on so much to cut the line of the pass from Lewandowski to Gavi. And in the second, he jumped on the pressure along with Carvajal, but none came and Gavi had ground to think and assist the Pole.

rudiger: many problems in the first half, together with Militao. Barcelona filtered constant passes through the center to De Jong, Gavi and Lewandowski, without pressure from the centrals. His bad pass to Camavinga ended in Gavi’s 0-1. He tried to cut head gaps, without precision. At 0-3, he didn’t get enough of Gavi.

Mendy: The most toned defender in the first half, contained Dembélé as best he could, who even so surpassed him in moments (in fact, he got a yellow card), and showed himself in attack. He put in a great cross that almost ended in Benzema’s 1-0, with a header. In the second part he gave alarming signs: he trotted down to defend several Barcelona attacks. If a footballer like him, who has made security his hallmark, doesn’t take it seriously…

Modric: little of the Croatian in the first half, coming late to the pressure and without dynamism to do damage with the ball. He has returned from the Bottomless World Cup and it shows. Ancelotti saw that it was not the day (again) and withdrew him at 64′ to give Ceballos a start.

Kroos: He cannot play as a defensive midfielder in important games, Madrid was too weak in the middle and found constant vertical passes, breaking lines. With ball, shallow. And without him, arriving late to close the agile Barça movement. He tried to close the gap from a distance, but the shot came out very centered. He left at 72 ′ for Asensio to enter.

camavinga: the most intense in the first part of the midfield, trying to generate superiority in the back of the Barcelona defense, but without support from the rest of the madridistas. Sad protagonist of the 0-1, but without much guilt: Rüdiger’s pass was poisoned. Ancelotti sacrificed him at the break to put Rodrygo in, probably an unfair decision from what was seen in the first half.

valverde: the Uruguayan, who showed positive signs in the semifinal against Valencia, fell back again. He has returned badly from the World Cup, he does not seem like the one from the first part of the season. Attached to the band, without speed or overflow; and inside, without precision to form dangerous connections. Rodrygo’s entry sent him to the center of the field, where he did not improve his performance too much. He took a yellow for a hard tackle on De Jong.

Benzema: The one who made the most effort to press in the first part, but without follow-up from his teammates, especially from Vinicius. He had a great opportunity for Madrid before the break, with a header from Mendy’s center in which he went too far, wanting to hit Ter Stegen with a Vaseline. And little more, although in the prolongation he found the prize with the 1-3, a goal that rewards the insistence. But it wasn’t his day either.

Vinicius: very little of the Brazilian, who continues without the point of form and getting entangled in debates with the referee and the rivals. He gets lost in overly elaborate dribbling attempts when, due to his current form, he should keep it simple and try to take advantage of his speed. Xavi placed Araújo on the side and made his life bitter, although in the second half the Uruguayan took a pipe that ended with a yellow card for him. His defensive neglect at certain times is exasperating; in the second part, he only dedicated himself to attacking.

Rodrygo: He entered at 46′ for Camavinga to try to give the team a boost; his entry displaced Valverde to midfield. He had a good chance with a shot from the edge that Ter Stegen cleared; With the entry of Asensio, he went on to a momentary role as midfielder that does not suit him badly. He put more energy into it than many starters.

ceballos: Came in at 64′ for Modric to give the midfield a boost. It started off very intense, but a very risky long pass ended up making it 0-3 for Pedri. He had a hard time with Gavi. Big cutout on a tile before 1-3.

Asensio: entered at 72′ for Kroos. The first time he could, he kicked, without much luck.

Nacho: He entered at 72′ through Carvajal to cover the leak through which Madrid was bleeding to death, through which Gavi and Balde constantly slipped.