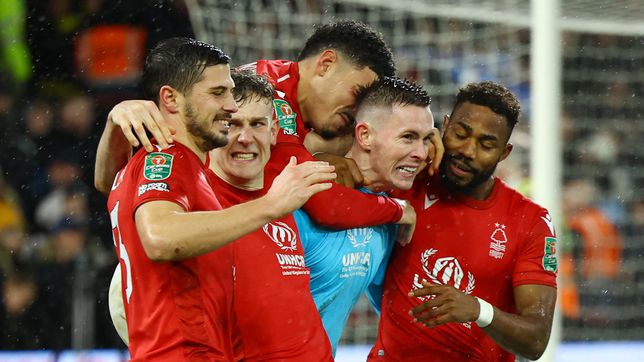 Julen Lopetegui and the referees are not having the best start to their relationship in England. After the two arbitration controversies that left the FA Cup match against Liverpool, a penalty not awarded to the wolves In the final minutes of the game, he leaves the Spanish coach’s team without the long-awaited qualification for the Carabao Cup semifinals. The local goalkeeper Dean Henderson, who was already the protagonist in the first 45 minutes with two great interventions, established himself as the hero of the Tricky Trees by stopping the final penalty of the shootout. Nottingham Forest thus joins Newcastle, Manchester United and Southampton among the last four teams in the tournament.

Boly and the law of ex

The good start to the game by Steve Cooper’s pupils was rewarded after 18 minutes. A former Wolverhampton player like Willy Boly caught a rebound inside the area after a corner kick to make it 1-0 on the scoreboard. A clear chance, a possible penalty and a goal from the Tricky Trees. Enough reasons for Julen Lopetegui’s team to make an appearance at the City Ground. However, Dean Henderson was not about to make things easy for the wolves. Two saves by the English goalkeeper against shots by Raúl Jiménez and Hee-chan Hwang from inside the area allowed the locals to maintain their advantage during the break.

The first section of the second half began rough. The author of the local goal gave the scare and, although he was able to leave the field of play on his own foot, a bad knee gesture forced Steve Cooper to replace the Ivorian defender. Julen Lopetegui then took advantage of the impasse to change the future of the meeting based on changes. Matheus Cunha, as against Liverpool, was one of those chosen by the Spanish coach to enter as a revulsion and Matheus Cunha, as against Liverpool, gave the equalizer assist for the wolves. Barely five minutes after leaving the pitch, a great combination between the two Wolverhampton Matheus, Nunes and Cunha, was finished off by Raúl Jiménez.

The marker did not move again and the game would be decided on penalties, although it would be another maximum penalty prior to those of the final round that could have determined the winner of the match. The image of Rúben Neves with the holey boot of Matheus Nunes justified the protests of Julen Lopetegui. The wolves They demanded a penalty on the Portuguese midfielder in minute 87′, who suffered a stomp from behind inside the area that the referee of the match failed to see. The Spanish coach, as against Liverpool, was once again penalized with a yellow card for his protests.

Finally, from the fateful spot, Steve Cooper’s team qualified for the Carabao Cup semifinals. José Sá and Dean Henderson saved each team’s first penalty, but it was the Englishman who ended up becoming a giant under the sticks. The goalkeeper on loan from Manchester United, a specialist in stopping shots from 11 meters, saved the fifth and final penalty against youth squad Joe Hodge.

The enemies of Josep Pedrerol director of El Chiringuito