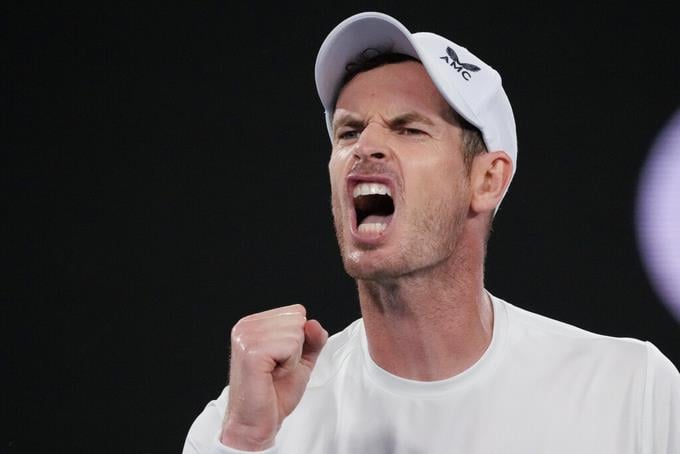 Even with a metal hip replacement and knee problems, Andy Murray pulled off his biggest victory in years on Tuesday.

Murray built a firm lead, let it disappear completely and saved a match point against Matteo Berrettini — who is nearly a decade younger and 50 places above him in the ATP rankings — before prevailing 6-3. , 6-3, 4-6, 6-7(7), 7-6 (10-6) in an epic five-setter that lasted over four and a half hours in the first round of the Australian Open.

“In recent years I have questioned myself. A lot of people have questioned my ability, whether I could continue to perform at the big events and the big games,” said Murray, a 35-year-old former world No. 1 who is now 66th in the ranking. “I feel very proud of myself after the game. That’s not something that normally over the years I haven’t felt at the end of tennis matches.”

It was the first time the Briton, with three majors under his belt, had beaten a Top 20 rival in a Grand Slam tournament since 2017. That was before he thought he should retire, and ended his career at Melbourne Park in 2019, when he fell in the first round a year after his first hip operation.

After a second operation in which a hip replacement was implanted, Murray decided to try to continue playing. These kinds of nights were the ones he had in mind as he moved on and spent three weeks in Boca Raton, Florida, training under Ivan Lendl during preseason.

By eliminating 13th-seeded Berrettini and a finalist at Wimbledon in 2021, Murray became the fifth man in the open era — since 1968 — with 50 Australian Open wins, equaling Novak Djokovic, Roger Federer, Rafael Nadal and Stefan Edberg.

The match was played with the roof of the Rod Laver arena closed due to the tournament’s regulations against heat. Murray wrapped up the first two sets in less than an hour and a half before Berrettini turned the match around to force the fifth set.

Murray was also runner-up five times at Melbourne Park, losing four times in the final to Novak Djokovic and once to Roger Federer.

“He is a great champion. I’ve said it so many times,” said Berrettini, an Italian who appears as the lead in “Break Point,” the new Netflix documentary series. “On a personal level, it was great facing him in that environment. A tremendous match. It was unfortunate that it was not in my favor.”

The matches of the night session at Rod Laver did not even come close to the quality and intensity of Murray-Berrettini.

In the first, second-seeded Tunisian Ons Jabeur beat Tamara Zidansek of Slovenia 7-6 (8), 4-6, 6-1. In the main matchup, Djokovic — a nine-time tournament champion — dispatched Spaniard Roberto Carballés Baena 6-3, 6-4, 6-0 in his return to the Australian Open a year after being deported from the country after failing to get vaccinated. against COVID-19.

For the seventh consecutive Australian Open, the Argentine Diego Schwartzman reached the first round, this time with a 6-4, 6-7 (6), 6-3, 7-6 (5) victory over the Ukrainian Oleksii Krutykh, an opponent from the previous phase.

The Chilean Nicolás Jarry, number 154 in the ranking and who won three matches to overcome the qualifying phase, gave the surprise by getting his first victory in the main draw at Melbourne Park, winning 6-3, 6-4, 7-6 (3 ) against 28th-seeded Miomir Kecmanovic of Serbia.

For his part, the Peruvian Juan Pablo Varillas demanded Alexander Zverev to the maximum five sets before succumbing 4-6, 6-1, 5-7, 7-6 (3), 6-4. The German Zverev suffered a serious ligament injury in his right foot when he played the semifinal of the last French Open against Rafael Nadal and recently reappeared when he competed in the new United Cup.

Will Prithvi Shaw get a spot in game 11? BCCI asked to contact Ranchi on Wednesday under any circumstances.