As everyone knows, Google has not publicly revealed the adoption numbers of the various versions of Android. However, the Uptodown entity recently published a study in which it reveals the most used versions of this operating system.

Unsurprisingly, Android 12 has yet to conquer dominance of the mobile market. Strictly speaking, the latest version of Google’s software appears only in the fifth position in this hierarchy.

Uptodown is an alternative Android app store to the Play Store. With 130 million active users, this entity considered it pertinent to reveal which are the most popular versions of Google’s software to access its store. 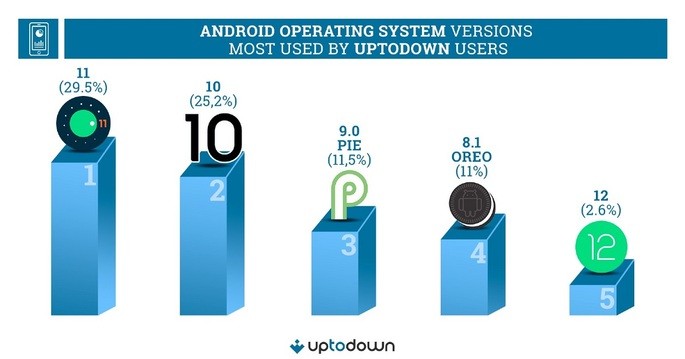 Their data reveals a residual representation of Android 12 in the market, with only 2.6%. Values ​​that place it far from dominating this study, although many brands have already started their respective update processes for this version.

Who dominates the hierarchy is Android 11 with 29.5% of registered accesses. This was the version launched by Google in 2020 and, as usual, it is still the most used version worldwide.

In second place is Android 10, still with a 25.2% preference by users who accessed Optodown. Next we have Android Pie with 11.5% and in fourth place Android Oreo with 11%.

The reality shown by the Uptodown study does not surprise those who know the Android market. Fragmentation has always been a scourge that Google has paid more attention to in recent years.

Even so, the American company does not control the entire Android update process, something that only corresponds to smartphone manufacturers. These give primacy to the latest models, often forgetting equipment with only two years on the market.

Also take into account the fact that we are only a few weeks away from the reveal of Android 13. The new interaction of this operating system will be announced at Google I/O, on May 11.