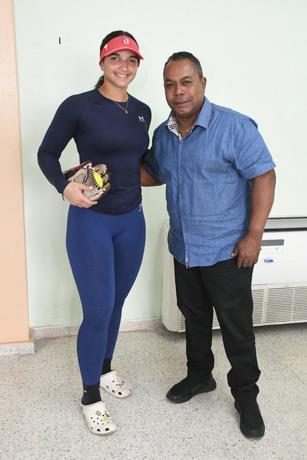 In the coming months, almost certainly for the Central American and Caribbean Games in El Salvador, the Dominican softball team will be joined by a player who dazzles with her talent and also with a physique that causes sighs.

This is Ana Richiez Herrera, a Dominican born in Miami, who is called to be the main pitcher and to occupy the third, fourth or fifth bat in the lineup.

Keeping the proper distances, the country will have a kind of Shohei Ohtani, the Japanese phenomenon of the Anaheim Angels, with the proviso that Ana is also an excellent defensive starter who can also play in any of the three outfield.

“My parents and my grandfather influenced me to play for the Dominican Republic,” said the versatile 18-year-old athlete, 5’9 tall and with an angelic face that matches her impressive body.

“Just being able to play and represent this beautiful country is an honor,” highlighted Ana, who was visiting the country last weekend and in a short pitching exhibition she did at the Olympic Center’s number two softball stadium frowned frowns and confirmed what the team’s coaching staff and management already knew.

“She is a young woman that we have been monitoring since she was 14 years old,” declared the manager of the national team, Fabio de León, about Ana, who has already been signed by the University of Alabama.

“The opportunity to have her in the national team has not yet presented itself to us. We hope that he will be with the team in the Games in El Salvador”, indicated De León in reference to the regional event that will take place in that nation between the months of June and July of this year.

She highlighted that the 64 miles she reaches from the mound is four or five miles higher than the average recorded by pitchers at the Central American level.

The identification that this exceptional athlete has with the country is not a thing of today and is expressed from the early hours of the day when, before leaving for Doral Academy Charter High School, where she is in her last year of high school, she has breakfast like a thoroughbred Dominican .

“The mangú, with salami and fried cheese is one of my favorite breakfasts. I eat everything,” said the youngest of the three children procreated by Víctor Richiez and Clary Herrera de Richiez.

The statuesque softball player awaits impatiently for the opportunity to sweat the white, red and blue uniform of the Dominican team, in which she only knows the pitcher Melody Vizcaíno, who like her is part of the academy of the Dominican Softball Federation in Florida , coordinated by Devin Pascual, from where more than 50 percent of the Creole women abroad have come.

In her childhood, Ana played volleyball and tennis before being eclipsed by softball, a sport she saw up close when her grandfather Jorge Herrera Pérez, an old player in the Liga Añeja of the Central Bank and founder of the Interbank League, gave practices to Víctor and Jorge, her two brothers.

“Grandpa and why don’t you ‘picha’ me. Since she was a child, she liked softball ”, Herrera Pérez recounts that Ana, who has stood out more than her relatives who still play at the collegiate level, claimed her.

“My grandfather inspires me a lot every time I see him playing,” Ana pointed out about her grandfather Jorge, who is still active in the so-called “Friendship Sport.”