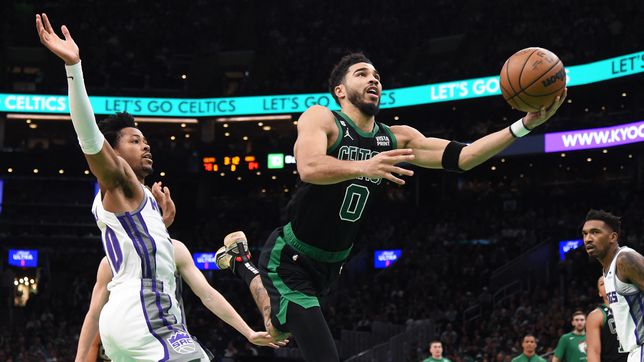 Sacramento Kings is in an excellent moment and it is one of the best news of this first leg of the season. And it’s good to remember that when seven straight wins, and a heady, well-earned euphoria, have been followed by two losses in two demanding games in the East. First in Atlanta, a difficult visit. Later in Boston, an almost impossible one: 122-104 in going to the dentist. the green hell: the Celtics have won eleven games out of twelve, they are 15-4, they look like the best team in the NBA once again and they crush rivals like who takes a look at the morning press. With such conviction and reliability that it seems to cost them no effort. The point is that the effort it’s serial. And the talent, and the physical. The best attack in the League subdued the second with its defense, some Kings in minimum points (104) and who now have a good yardstick on their court, against Phoenix Suns. His situation, in any case, is good: 10-8 now.

In fact, Mike Brown’s team showed that right now they compete in almost any circumstance. They avoided bleeding in the first half (from 38-22 to 64-62) and took command in the third quarter: 78-84 with four minutes left to close that set. The problem is that four to complete the last one lost 117-90. In twelve minutes of play they had fallen 39-6. But there was not much demerit on his part, it was rather the inevitability of these Celtics who linked a 19-0 between the end of the third quarter and the beginning of the last one. And to those who don’t seem to care who’s in front: win. Jayson Tatum (30 points, 8 rebounds and 4 assists) led with an MVP scent. Jaylen Brown was the perfect squire (25+5+4) and Al Horford was decisive in the final reaction. Also White, Brogdon… you know. A great team that in a few weeks will recover Robert Williams. If we were few. The Kings will have better days to show off their optimism, hopefully not dented by this pair of losses. They stayed at 20 assists for 18 losses and a 9/36 in triples. That’s not how you win in Boston. De’Aaron Fox had 20 points and Domantas Sabonis had 18 with 10 rebounds and 6 assists.

The Bucks, the only ones who keep up

If it can be argued that the Celtics are now the best team in the League, it is basically because exists Milwaukee Bucks. Those from Wisconsin overwhelmed the Cavaliers (117-102) and made the hierarchy in the East clear: 13-5 them, hand in hand with the Celtics, 12-7 some Cavs who had four straight victories. Since, precisely, his last visit to Milwaukee. The game made it clear that, still without a yet-to-debut Khris Middleton, the Bucks are a couple of notches above the up-and-coming Cavs. A threatening 31-47 in the first half ended at 52-63 at the break. The Cavs ended there: 35-10 in the third quarter with a 23-2 run in eight minutes. Devastating (75-65). The advantage reached 22 points, completely slowed down by the Cavs, who lost Jarrett Allen to injury and in which Donovan Mitchell (29 points) and Darius Garland (20) added 38 points in the first half… and only eleven in the second.

Giannis Antetokounmpo, of course, led the charge with 38 points, 8 rebounds, 6 assists. Jrue Holiday took time to warm up due to foul problems but between Bobby Portis (14+8+4), Jevon Carter (18, 5/6 in triples) and the usual work of Brook Lopez they did enough to accompany the titan Greek. Right now there are two marches in the NBA: on the one hand, the Celtics and Bucks, on the other, the others, whatever they want to order. Everything to green.

Another very valuable victory for the Sixers

What the Sixers can scratch without his three best players (Joel Embiid, James Harden, Tyrese Maxey) he will be very welcome in Philadelphia. Without big three (and without Matisse Thybulle) Doc Rivers’s team managed the first of the two games they had to play in Orlando (tomorrow there will be a rematch for the Magic): 99-107. The victory puts a team currently massively hurt by injuries above 50% (10-9) and helps fill the barn at such a difficult time. Without much aesthetic to put in the mouth, at least the Sixers were ultra efficient in the third quarter. 11/21 shooting and 4 triples against an opponent who signed a total 9/35 from the line of three and lost the rebounding battle. That 20-30 in the third quarter was definitive, although then the Magic tightened (they are 5-15, five losses in six games). The absence of the stars is allowing players like De’Anthony Melton (13 points, 4 assists, 4 steals) and Shake Milton, who played one of the best games of his NBA career (24 points, 9 rebounds, 10 assists). With points from Tobias Harris (23+10+5) and triples from Niang (5/7, 18 points), the Sixers survived attempts by Bol Bol (18+8), Franz Wagner (24) and a Paolo Banchero (19+4+3) who played his first game since day 7. The Magic did not play Wendell Carter Jr and Chuma Okeke.

The Heat fell one game away from the NBA Finals last season. For now they are far from that level, but they are straightening the course: 9-11 after their second victory in three days (1101-107) against the Washington Wizards, which is 10-9 after not being able to take advantage of their good start (28- 38 the first quarter) and the absences of Max Strus and, above all, Jimmy Butler. The Heat knew how to suffer, gritted their teeth and saved the night in the final exchange, finished off with a miss by Bradley Beal. Lowry (13+7+8) and a Caleb Martin who added 20 points and was important in defense accompanied who without Butler is the clear axis of the team, the center Bam Adebayo: 38 points, 12 rebounds, 3 assists. The Wizards had it in their hands, but fell short despite 28 points from Kyle Kuzma (with 7 rebounds and 5 assists) and Bradley Beal (with 5 and 5). Kristaps Porzingis finished with 18 points and 7 rebounds for a team that missed a golden opportunity to clinch a victory in Miami.

44 points from Trae Young, 39 with an 8/13 triple from Dejounte Murray… and defeat against the worst team in the NBA: 128-122. It’s hard to explain how the Hawks (11-8 now) missed a game in which they led by 15 in the second half and had their backcourt supersonic at full capacity against some Rockets that until tonight had only three victories (now four: 4-14). But the fact is that the Hawks got into a mess in the last quarter (34-18), in which they began conceding an 8-0 and ended up completely falling apart against a young and chaotic rival who found a way to attack a Hawks without Clint Capela and with very little help for Trae and Murray. Jalen Green scored 30 points and handed out 5 assists, Kevin Porter Jr finished with 12+7+10 and Jabari Smith Jr showed that he is going further. The number 3 in the draft, who started the season weak, finished with 21 points, 9 rebounds and a 5/11 triple. Excellent news for a Rockets that had 21 points and 15 rebounds from Kenyon Martin Jr, 20 points from Garrison Matthews and the usual work of an Usman Garuba settled in the rotation, also after the return of Bruno Fernando. The Spanish center contributed 9 points, 5 rebounds and 3 assists in almost 20 minutes on court.

The Bulls also crash in the West

After beating the Bucks and Celtics, the most difficult situation that can be faced right now in the NBA, the Bulls crashed in OKC against some Thunder (123-119 after overtime) that are no longer a bicoca and who compete And it has, in fact, the same record as Illinois: 8-11 for both teams. Good data for some, very discreet for others… He touched crosses in some Bulls who had chances to close the victory after coming back in the last quarter at the hands of Zach LaVine, who added 12 of his 27 points there. But he came to overtime, sentenced by five free throws by Shai Gilgeous-Alexander (30 points, 8 rebounds, 7 assists): three to give his team the lead with 27 seconds remaining (121-119 after a challenge unsuccessful by Billy Donovan) and two others after a mistake by DeMar DeRozan, who did not take advantage of the ball to tie (he finished with 30 points and 6 assists). A defeat that leaves a bad taste in the mouth of the Bulls, and another good victory for the youngsters but no longer linnets Thunder. A team at its best level in recent times and that is advancing little by little in its reconstruction.