America Biden Administration: Prominent Indian-American legal expert Anjali Chaturvedi has been named by US President Joe Biden as General Counsel in the Department of Veterans Affairs. According to the White House website, Chaturvedi is currently the Deputy Assistant Attorney General in the Crime Division of the US Department of Justice. Chaturvedi has been named as General Counsel in the US Department of Veterans Affairs. The core vision of the Department is to provide Ex-Servicemen the world-class benefits and services earned by them – and to do so by adhering to the highest standards of Compassion, Commitment, Excellence, Professionalism, Integrity, Accountability and Leadership. 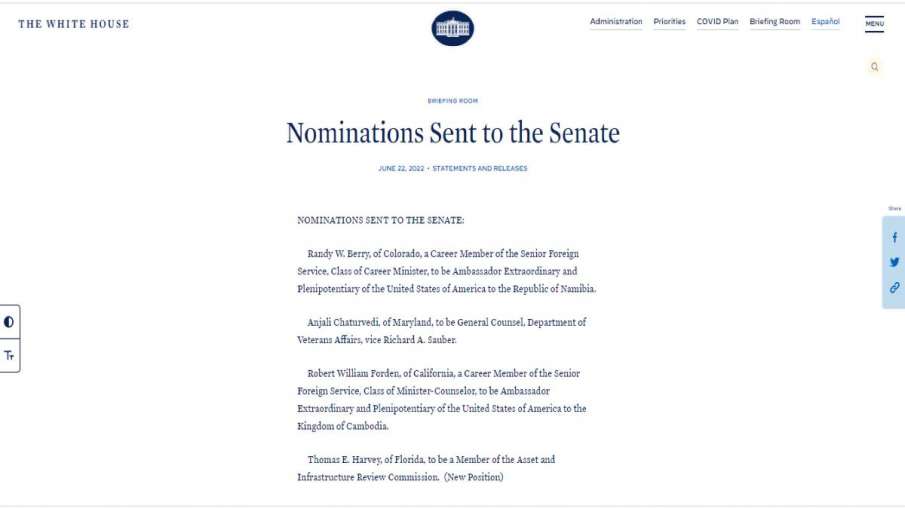 Know who is Anjali Chaturvedi

Anjali Chaturvedi was born in Courtland, New York. He graduated from Georgetown University Law School and Cornell University. He is also a Certified Yoga Teacher and Head Coach. She lives with her husband and son in Chevy Chase, MD.

Chaturvedi has worked in all the three branches of government during his career as well as has done private practice. Prior to returning to government service, Chaturvedi served as Assistant General Counsel and Director of Investigation for Northrop Grumman Corporation and headed the company’s global investigative team. Chaturvedi previously served as Assistant General Counsel at British Petroleum and a partner at the Washington DC law firm of Nixon Peabody. Before entering private practice, she was a federal prosecutor.

During his tenure in the Justice Department, he served in the U.S. Attorney’s offices in the District of Columbia and the Northern District of California, as deputy chief of the felony trial section and chief of the organized crime ‘strike force’ and on the Senate Judiciary Committee for Senator Diane Feinstein. Including working as a lawyer.