We recently wrote about the upcoming AMD GPUs based on the Navi 24 chip. Two variants are expected to arrive on the desktop, namely the Radeon RX 6500 XT and the Radeon RX 6400. Now several Navi 24 based laptop video cards have appeared. .

A recent Linux driver from AMD reveals that the company is working on a Radeon RX 6500M and Radeon RX 6300M. Presumably, the RX 6500M will be the portable variant of the RX 6500 XT (desktop), with pretty much the same specs. We are probably talking about 16 compute units (1024 cores) and a 64-bit memory bus, with a maximum of 4 GB of vram attached.
Based on its name, the RX 6300M ​​seems to serve the lower end of the market.

This morning we wrote about Intel’s upcoming Arc Alchemist budget cards, which are expected to hit the market in the spring. AMD’s Navi 24 models can compete with that. 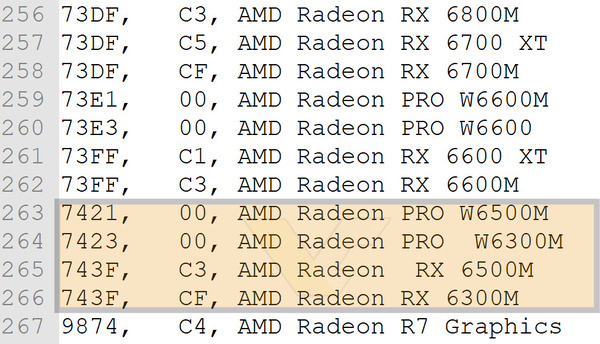 The new gpus and its pci ids. Source: AMD, via VideoCardz

In addition to the Radeon RX cards, the Radeon Pro W6500M and Pro W6300M ​​are also represented in the controller, also based on the Navi 24 chip. If the past is any indication, those cards have pretty much the same hardware as their Radeon RX siblings. , but with workstation controllers and possibly slightly different clock speeds.

It is not yet known when AMD will officially announce the new GPUs. The CES fair, which will take place in January 2022, seems like a no-brainer.