Within The advantages of electronic commerce is that it is an open door to the world of cross-border trade. Consumers today have access to an unlimited variety of products and distributors due to international electronic commerce.

On the one hand, smaller countries like Austria or Belgium tend to have higher cross-border e-commerce shares. In the strong Western economies of France, Germany and the UK, consumers are primarily looking for a different product selection or cheaper prices when shopping at online stores based outside their home countries. Despite this, on a global scale, who are the real players in e-commerce that cross-border shoppers primarily target? 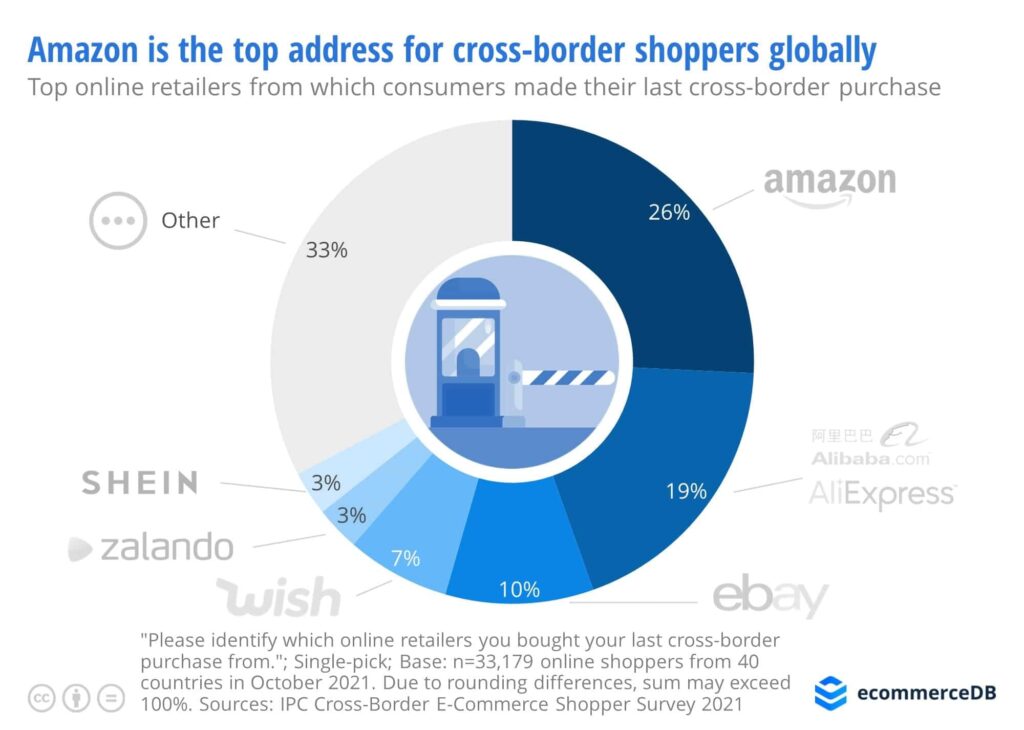 A recent survey conducted by the International Post Corporation identified the main leaders. Conducted among more than 33,000 online shoppers from 40 countries around the world, IPC helped paint a clearer picture of the international cross-border e-commerce customer.

In their overview, China was the most attractive country for cross-border shoppers: 35% of respondents from all 40 countries made their last cross-border purchase from a supplier based in China. The United States has 14%. Still, the world’s top leader for cross-border online shoppers is the US e-commerce giant. amazon.

The second most popular position for global cross-border online shoppers is Alibaba / AliExpress. 19% of cross-border purchases were made in the online stores of the Chinese technology giant. Alibaba is an exceptionally popular shopping destination for users in Russia. 74% of Russian e-commerce customers made their last cross-border purchase from Alibaba.

The third place in the list of the most popular online stores for cross-border e-commerce is occupied by eBay with a fee of 10%, Wish it is in the fourth rank with 7%. Both Wish and Ebay lost shares compared to the 2019 IPC report, while Amazon extended its lead in several countries.

Although cross-border shopping has become popular around the world, with some countries accounting for substantial cross-border shares of their total e-commerce revenue, there is still a trend towards more domestic e-commerce, according to the CIP survey. 27% of respondents stated that they intend to buy much more from national e-retailers in the future.

Will the Ripple price fall further?

Hospitals: "This summer, we can have deaths"alarmed the head of the emergency department of the Georges-Pompidou hospital

Bitcoin Uncovered: Why Bitcoin Will Never Make the Switch to PoS

Scammed by a fake wealth advisor, a couple loses all their savings

Cardano founder: Terra (LUNA) is warning for other crypto