THE Amazon is one of the old sub-brands of xiaomi which has since acquired its independence. In fact, it is one of the best-known brands of accessories, gadgets, smart watches and activity bracelets, also present in Portugal.

The best of all? Amazfit now has a new smartwatch dubbed Amazfit GTR 2 New Version which will be presented very soon, on May 23. This model may later also reach Europe and the national market.

The Amazfit GTR 2 New Version arrives on May 23

The new Amazfit GTR 2 New Version smartwatch arrives as a successor to the Amazfit GTR 2 launched in 2020. However, the manufacturer would also launch the Amazfit GTS Mini New Edition in key markets such as India, so this new launch seems not only plausible, as also expected.

It’s also worth noting that, until now, “New Editions” have been presented as cheaper versions of the base product, stripped down to the essential features for each category. In this way, Amazfit manages to place a similar, cheaper and still competent product on the market.

This same formula must be followed for the new version of Amazfit GTR 2 to debut next Monday in India. There, its assets will be the high-resolution AMOLED screen, as well as the ability to make phone calls via Bluetooth.

The new smartwatch will have a great quality/price ratio 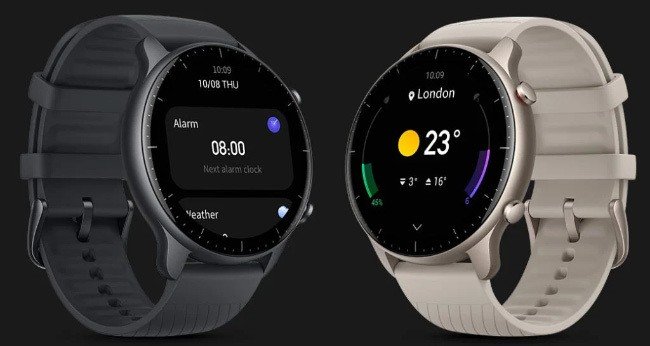 However, we will have differences between the current Amazfit GTR 2 and the upcoming Amazfit GTR 2 new version. However, the most important features will remain unchanged as a quality guarantee for this new cheap smartwatch in 2022.

For example, the 1.39-inch full round screen will keep the high-resolution AMOLED screen. It will also feature rounded or 2.5D glass protection for a more refined look, in addition to the maximum brightness of 450 nits.

The smart watch will be built in aluminum (case), with silicone straps. Thus, it will have a more sporty look compared to the previous version of the watch, with a smooth and textured finish on its bracelet.

The watch will be compatible with Android and iOS (iPhone) smartphones

The new version of Amazfit GTR 2 will arrive in India on May 23.#Amazfit #AmazfitGTR2NewVersion pic.twitter.com/AszX2FEfZf

It can also be said that the New Version of Amazfit GTR 2 will have support for Android and iOS smartphones, as well as various capabilities to monitor the user’s physical activity and health. Finally, its internal storage will be 3GB.

The smart watch will have a 471 mAh capacity battery with up to 14 days of autonomy, according to leaked information. Now, we just have to wait for its official presentation to confirm price and availability.

On a final note, according to the leaksthe price will be the equivalent of 168 dollars or 158 euros for the new Amazfit GTR 2 New Version, in the absence of official confirmation.