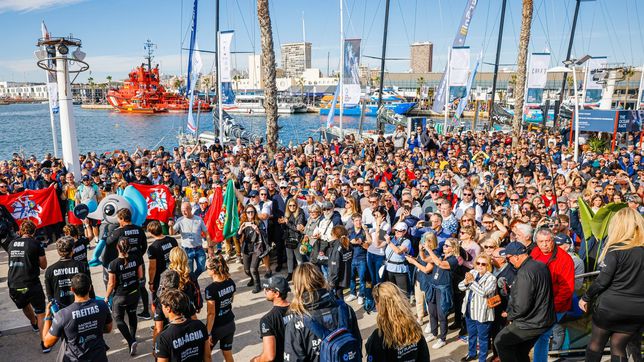 Alicante said goodbye this Sunday with hugs, kisses, smiles and also tears to the five IMOCAs that are already competing in The Ocean Race and the six VO65s that will complete just three stages for The Ocean Race VO65 Sprint Cup. The IMOCAs were the most eye-catchers in a crowded dock of spectators. In front of the Postiguet beach, the 11 boats made a rectangular route to delight the nearly 70 spectator boats that gathered in the water to say goodbye before heading to the island of Tabarca and after go towards the open sea on the way to Cape Verde. This is the first of the seven stages that will form a world tour that is already considered historic. And the reason is that the third stage will be the marathon: it will take a month to complete the 12,750 nautical miles from Cape Town (South Africa) to Itajaí (Brazil).

With a wind between ten and 17 knots, the 11 boats had a fast and hectic start. The first was given at 14:05 for the six VO65 where the Pablo Arrarte’s WindWisper Racing Team set the pace. This Polish-flagged ship was precisely one of the last to leave the port and Arrarte was clear: “We are going to haggle, which is what we like”. The farewells are a mixture of emotions and Viva México, in which Jaime Arbones, Chuny Bermúdez de Castro and her son Carlos, put on heading to Cape Verde with the song ‘cute little sky’ playing on the pier.

The second start, around 16:05, was for the five IMOCAs. It was with a 12-knot wind and an impressive Biotherm Racing already showed muscle from the start. The good wind conditions allowed them to fly and this further increased the joy of the fans. GUYOT Environnement – ​​Team Europe had problems with their sails at the start and this slowed them down a bit, but Támara Echegoyen, who is a reserve in the Franco-German team, did not hesitate: “This is very long. Patience, everything will be fine. There is confidence and the illusion is maximum ”. The fleet is already determined to experience the six months of navigation that lie ahead (32,000 miles) and it is expected that tonight, the first, will be in the Alboran Sea and in the Strait of Gibraltar. The conditions will begin to test the boats and that is that they could face waves of up to 3 meters high due to the west wind.

Richard Brisius, president of The Ocean Race, confirmed that The next edition of the sailing tour of the world will begin in Alicante during the winter of the 2026-2027 season. It will therefore be the sixth time that he will depart from the Valencian city. Of course, they want more because the president of the Generalitat Valenciana, Ximo Puig, explained this Sunday during the outing that The Valencian government works so that the relationship with The Ocean Race is permanent and Alicante is always the port of departure for this regatta. On the other hand, the organization also revealed that it will again hope to celebrate The Ocean Race Europe, the second edition, at the end of the summer of 2025. In this way, both the world tour and The Ocean Race Europe will be held in cycles of four years.