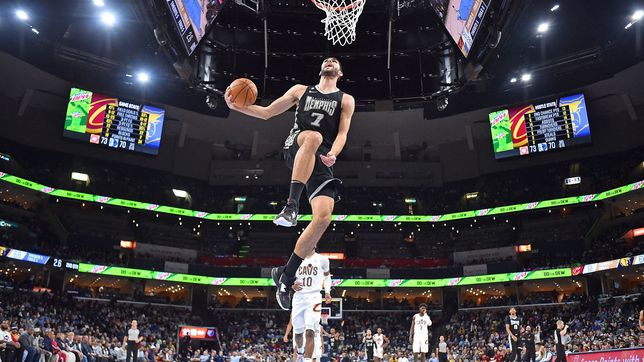 The Grizzlies are going like a shot. 11 straight wins for the Memphis franchise, its best all-time since the recent days of the Grit and grind or, stretching the truth to the maximum, at its best moment in history. The resilience of a young and promising group has gone from turning the squad into the present rather than the future, securing the years to come while opting for everything in the present moment. Two things that coincide in time is very complicated but that they have known how to manage perfectly, without letting last season become an accident and those fantastic Western Conference semifinals that they reached to lose against the Warriors. They are still in the fight, they are an entity to be reckoned with in the coming years and, within the madness of the Western Conference, they are strong candidates to reach a very cheap Finals on that side of the box.

The victory against the Cavaliers was expensive, but it came out. Without Donovan Mitchell, the Ohio team was really close to ending the great streak of the Grizzlies, the best active in the entire NBA. However, they gave in in a crazy ending: a good little bomb from Evan Mobley put them 3 up (111-114) with 1:14 to go, but they didn’t score again. First there were two free throws for Ja Morant in a foul much protested by the Ohioans, and then two tremendous defenses by the Grizzlies with a basket by Steve Adams in between to tip the scales. The two defensive hits were on Darius Garland, one with a block by Jaren Jackson and subsequent violation of 5 seconds in the pass; and another in the final playwith Dillon Brooks blocking, again, the triple attempt of the great point guard, who had a good performance but could not solve things in the end.

Garland went, in fact, to 24 points, with 7 rebounds and 14 assists (with only 2 turnovers). Without Mitchell (with a sore groin after Monday’s game against the Pelicans), He had to take full responsibility in attack and share the game, something he did perfectly, also securing the ball a lot. The entire Cavs quintet exceeded ten points, with 17 from Isaak Okoro, a huge Evan Mobley (18+15, although 6 losses), 14+8 from Jarret Allen and 23+4+6 from Caris LeVert. However, JB Bickerstaff moved the bench very little and did not introduce any substitute on the track for more than the 16:49 played by Lamar Stevens (5+4), a very poor rotation that left the team short without Mitchell and barely had revulsions in In the middle of the regular season and at a time so far from the playoffs, when it’s more common to leave your starters a lot of playing time unless you’re Tom Thibodeau and you do it every day. Kevin Love was barely 9 on track for 6 points; Ricky Rubio continues with his particular improvement and went to 12, with 7 goals (2 of 7 shooting), 3 rebounds and 4 assists.

In the Grizzlies, as usual, everyone contributed: 24 points and 8 assists from Ja Morant, 25+4+4 from Desmond Bane, 13+10+4 and the winning basket (in the form of a tap, after picking up a capricious pitch from Morant) for Adams, 15+7 (with 4 blocks) from Jaren Jackson and just 8 points from Dillon Brooks, who made up for his erratic shooting day (4 of 12, with 0 of 5 on 3-pointers) with his spectacular last defense against Garland. And Santi Aldama, of course, who continues to contribute as one more and has his place absolutely guaranteed in a rotation in which he almost always adds up: against the Cavs, 16 points in 19:31 on the court, with 6 of 8 shooting from the field and 4 of 6 in triples. All insurance that he fulfills in defense and he is accurate in attack and gives more breadth to the game and creates more spaces in the area when he enters the court. Aldama adds and continues. The Grizzlies are hot on the heels of the Nuggets. And the Cavs are his latest victim. that’s the way it is.