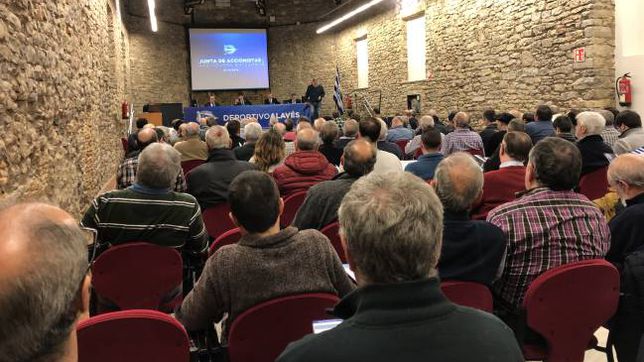 Deportivo Alavés published yesterday on its website the call for the General Shareholders’ Meeting for Wednesday, December 28, starting at 6:00 p.m. It will take place in the Francisco de Vitoria room of the Europa Conference Center and not in the Villa Suso venue as on other occasions. The agenda will be the usual with the report for the 2021-22 season and then move on to other points.

It will not be easy to convince shareholders about the sports management of last year since the team was relegated to Second but the Board of Directors will have no problem approving all the items on the agenda since it controls more than 82% of the total share capital. Although around one hundred people usually attend the Meetings, their percentage in society is minimal and they hardly have a leading role in the final result.

Later it will be presented the budget for this campaign, which will be significantly reduced the military now in the Smartbank League, with the consequent drop in income, especially on television. The appointment will close with the question and answer chapter, at which time the Council is usually questioned on many issues of a social, but also economic and sporting nature.

The documentation can now be collected at the club offices and many people will take advantage of this afternoon to do so before witnessing the Alavés-Villarreal B of the league. Precisely, there has been discomfort in some groups due to the time of the call, on a Friday night. “It is proof of the interest they have in its diffusion”, leaks from Accionistas Albiazules Minoritarios. 12 Hamabia Herri Futbola added that “on the day the club has given tickets to former subscribers so that they can be reinstated, it refuses to personally communicate the call for a Meeting to the nearly 3,000 shareholders.”