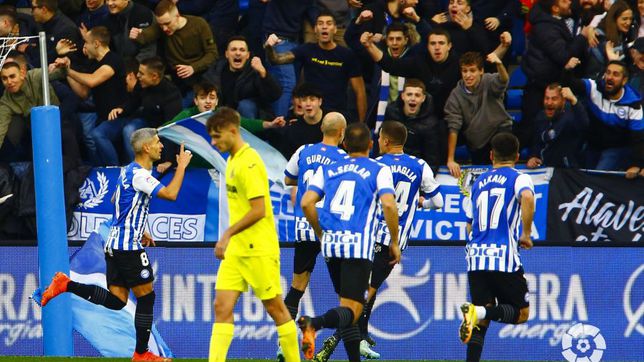 That was the game

A forceful Alavés defeats a Villarreal who was guilty of lack of experience.

The game started with a more dominating Villarreal B that controlled the ball more. It was in minute 20 when the groguets had their clearest chance in the entire match. ORA shot from outside the area by Collado crashed into the post of the goal defended by Sivera. Right after Miguel and Guridi answered on a double occasion for Alavés. From there, Alavés began to own the ball and the chances. First, a shot by Miguel from the crescent of the large area and a shot by Salva Sevilla that Jorgensen repelled, With five minutes to go before the break, a cross from Guridi hit Íñiguez’s hand. After entering the VAR, Salva Sevilla was in charge of converting the penalty.

The second part had a slower pace than the one just finished. Long moments without chances for any of them, but mostly at stake in the Villarreal B field. The VAR came back in to correct a direct red card for Collado, which finally ended up in yellow. Already at 85′ Benavídez headed a cross from Toni Moya and put the finishing touch. Villarreal B showed no sign of going for the goal, even more so when Mbacke was sent off for insulting the referee after a foul by Arana.

Alavés will travel to Nuevo Los Cármenes to face Granada the next day while Villarreal B will receive Leganés.