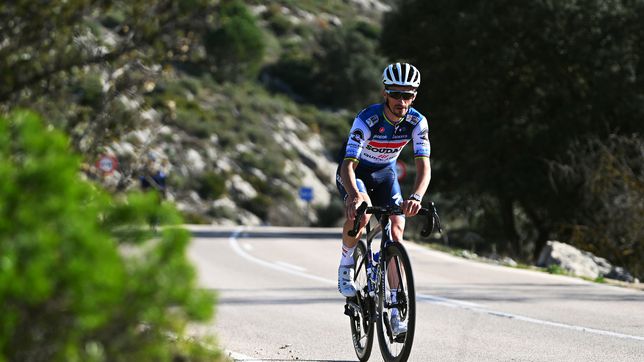 Julian Alaphilippe (30 years old) starts in the Balearic Islands what will be his tenth season in the Quick Step ranks. The Frenchman returns to the Challenge for the first time since 2014 And he does it with the desire to vindicate himself after a complicated 2022… and after recent criticism from his team’s manager, Patrick Lefevere. “I told him he couldn’t keep hiding behind illnesses and falls”revealed the Belgian, who is used to saying things clearly.

Yesterday, from his hotel in Muro, he responded virtually to the media, including AS, without giving much importance to what happened. “Patrick and I are always very transparent with each other. It has been so from the beginning. It was the case when things were going well and now also when things are a little worse ”, said the former world champion in 2020 and 2021. “Patrick’s statements will not change my way of working and my motivation. I don’t know if it’s because I’m not wearing the rainbow jersey anymore, but I don’t feel any extra pressure. I will do everything I can to succeed again”, he concluded loulou. In 2022 he only reaped two wins in a campaign marked by falls and illness.

Today, at the Calvià Trophy (3:00 p.m., Eurosport and TDP) in the first of the five Challenge events, he started as one of the favourites. It is a 150 km test made up of a leg-breaking route with five ascents included…and adverse weather. The rain and the wind were protagonists yesterday in the previous one and it is expected that it will be the tonic during the week. “It seems that it will be one of the coldest of the year”, say natives of Alcudia. Together with Quick Step, Movistar (Cortina, Serrano…) and UAE (Wellens, McNulty…), They aim to be protagonists in some trophies with 21 teams (after the last minute loss of the Kiwi due to licensing problems), eight of them World Tour. A frantic start.

Check all the profiles of the Challenge de Mallorca 2023

Famous Popeyes restaurants to open in the country