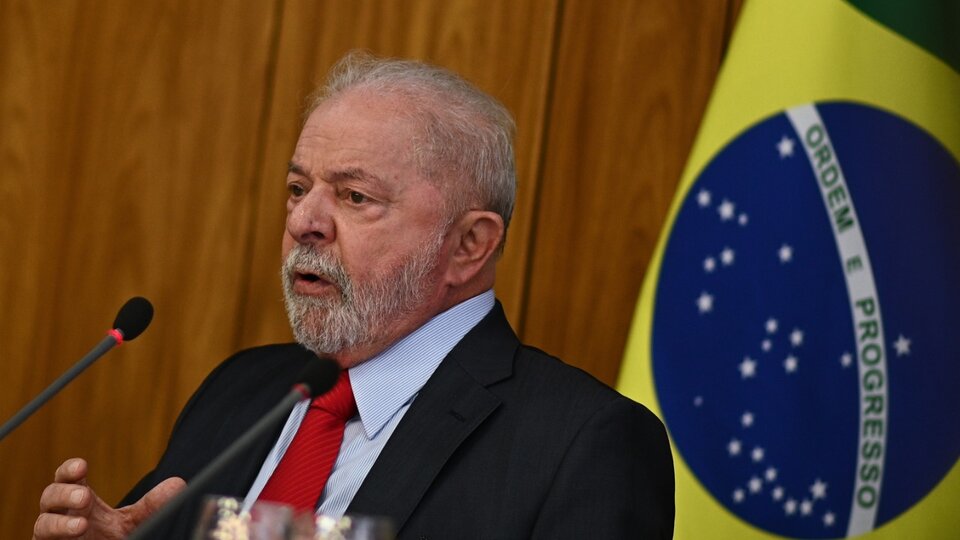 Lula’s counterattack arrived. The new Brazilian president denounced the complicity of the military in the coup attempt that occurred last Sunday when thousands of followers of Jair Bolsonaro invaded the palaces of the Presidency, Parliament and the Federal Supreme Court located in the center of Brasilia.

When there are still glass splinters around the Planalto Palace, the president provided details of what happened while information continues to emerge about this attack on democracy perpetrated seven years after the coup that overthrew Dilma Rousseff. Lula elaborated yesterday on the dynamics of the invasions and the plan to which they would respond.

Around four in the afternoon on Sunday, the vanguard of militants clad in yellow jerseys of the Brazilian team, the distinctive clothing of these tropical phalanxes, climbed the slightly inclined ramp of the property and immediately entered the main hall before the unchanging gaze of the military on duty

“I am convinced that the gate of the Planalto was opened to allow people to enter easily. See that the gate was not broken, that is, someone facilitated their entry,” Lula said. “There were many people from the Armed Forces who were here inside the Planalto who colluded with them (Bolsonaristas),” she reinforced. In addition, the number of soldiers was less than usual despite the fact that since Friday there were rumors about a possible opposition mobilization.

The bulk of the attackers arrived in the center of Brasilia from the Army Headquarters where they were camped for seventy days in which acts were carried out for the military intervention and against the non-existent “fraud” that would have allowed Lula to win over Bolsonaro in the elections. from October 30. In some of these rallies, more than one speaker spoke of eliminating Lula and proposed bringing weapons to the camp: all of this before the complacent gaze of the generals and high-ranking officers who have their offices in the General Headquarters, located about six kilometers from the Planalto.

The invitation to mobilize armed activists made in the camp was similar to the one made by congressman Eduardo Bolsonaro when he proposed a national rally of the Hunters, Shooters and Collectors clubs (CACs, in Portuguese) in support of his father, Jair Bolsonaro. These groups of CACs grew exponentially during the previous government, which facilitated the issuance of cards with almost no requirements and freed up the sale of heavy weapons, giving rise to the formation of a shadow army.

During a breakfast offered yesterday to journalists, Lula dismantled the plot devised by the military behind the attacks last Sunday. The first step was to cause “chaos” with the three palaces on fire while “the military and the police colluded” with the attackers and remained idly by.

Faced with a situation completely out of control, the government would be forced to request the intervention of the Armed Forces through a Law and Order Guarantee decree, which would give broad powers to the military corporation and would leave civil power on its knees. Lula said that upon noticing the military trap, the Brasilia Police decided to intervene and summon the National Security Force, to restore “normality” without asking the Army Headquarters for help.

“If I had signed a decree guaranteeing Law and Order on Sunday, I would have renounced my responsibility as president and the coup that some people wanted to happen would have occurred,” he explained. “In other words, Lula would have actually stopped exercising the government so that some general assumes the government”, said the president in his most explicit indication that behind the hordes was the military power. And then he remarked “the Armed Forces are not a moderating power of the Republic as they believe to be. The The role of the Armed Forces is defined in the Constitution. The role of the Armed Forces is to defend our sovereignty against possible external enemies.”

On Sunday, Lula had identified Bolsonaro as the person responsible for the failed coup and reviewed all the destabilizing maneuvers promoted during his term. Since 2021, when Donald Trump encouraged the seizure of the Capitol in Washington, the former Brazilian captain began to justify this type of sabotage of democracy under the excuse of fraud. If it had not been for the “instigation” of Bolsonaro’s coup, there would not have been the attack on the palaces in Brasilia, assured Lula, who this Thursday charged again against his predecessor, whom he described as “unbalanced” and “genocidal”. .

The leader of the Workers’ Party (PT) expressed his willingness to investigate what happened and for justice to be done, but assured that “my government will not carry out systematic persecution” against anyone, I am not going to be fighting with Bolsonaro, because my mandate It’s to fight against hunger (…) I don’t want to give the idea that there will be persecution.”

During the almost two hours of conversation yesterday in the Planalto, Lula promised to hold frequent and respectful meetings with the press, resuming a routine from his first two terms between 2003 and 2010. Along with the president were his wife, Rosángela “Janja” Silva, and the minister of Social Communication, Paulo Pimenta, a deputy identified with the battle for the democratization of information and a critic of private news corporations.

With a long militancy in the PT, the sociologist “Janja” is a kind of minister without a portfolio, to whom her husband entrusted important missions such as organizing the celebrations for the inauguration of January 1 and establishing dialogue with social movements, peoples natives and the Afro-descendant population. “Janja” was one of the most applauded people on Wednesday during the inauguration of the ministers of Indigenous Peoples, Sonia Juajajara, and of Racial Equality, Anielle Franco, sister of the councilwoman murdered in Rio de Janeiro by two former police officers.

At that event, one of the slogans chanted was “No Amnesty,” the same one shouted by thousands of PT supporters who cheered the president on January 1st upon receiving the presidential sash. This slogan summarizes the claim to investigate, prosecute and convict Bolsonaro and his ministers for the crimes committed between 2019 and 2022, such as the genocide of Amazonian indigenous people or the hundreds of thousands of Covid patients who died from the boycott of vaccines. As of this Sunday, the demand for justice also applies to those responsible for the attempted coup.