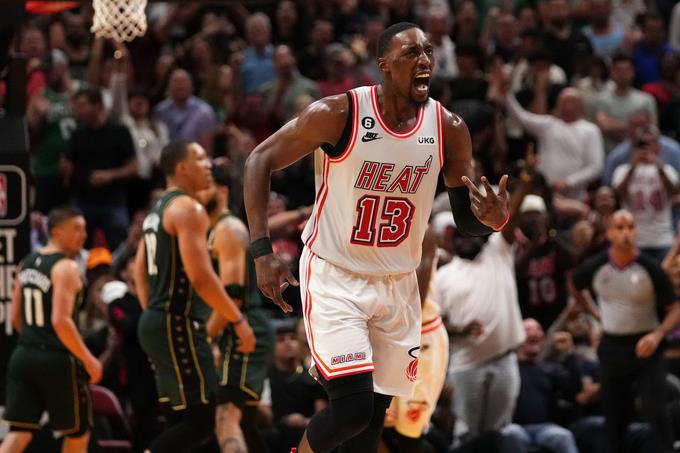 Center Bam Adebayo led the Heat’s fourth-quarter comeback to beat the Boston Celtics 98-95, an invaluable win for the Miami team that played without star Jimmy Butler.

Miami was rocked by Butler’s injury withdrawal shortly before kickoff in Florida, where they were facing the Eastern Conference leaders and most bookie favorites for this year’s NBA crown.

But Adebayo stepped up with a 30-point performance and Miami sent Boston to a second straight loss after Monday’s loss to Orlando.

Adebayo’s haul included a crucial contribution down the stretch as Miami overcame a 10-point deficit with just over eight minutes remaining to wrap up a hard-fought victory.

The Celtics seemed poised for a morale-boosting road win when they opened up an 87-77 lead midway through the fourth quarter.

Adebayo then delivered a hook shot and dunk in quick succession to make it 87-87 and then hit the go-ahead basket to give Miami the distance they wouldn’t lose to wrap up the win.

"Everyone has to take more responsibility, everyone has more on their plate"Adebayo said later.

"This team is built for that. We’ve had guys in and out of the rotation, injured or not. Just having that will to win, that’s all I can ask of my teammates."Adebayo added.

Adebayo’s performance was the kind of display that could put him in contention for the All-Star Game come the NBA’s midseason break.

However, Miami’s towering center downplayed speculation that he could earn a second All-Star call after his lone appearance in 2020.

"I’ll let the chips fall where they may"clarified Adebayo to the TNT transmission. "I’m here playing, enjoying this environment, enjoying my team.

"Stars game? I would love to be in it, but it depends on the coaches. But you’ve seen my work so far"added the pivot.

Miami’s other top scoring contributions on Tuesday came from Highsmith, with 15 points off the bench, Max Strus (13 points) and veteran Victor Oladipo (12).

The Celtics welcomed Robert Williams back from injury, but were without defensive stalwart Marcus Smart, Al Horford and Malcolm Brogdon.

Miami improved to 27-22 with the win and is sixth in the Eastern Conference.

Jokic returns in style
In another game on Tuesday, Nikola Jokic returned from a two-game injury absence to lead the Denver Nuggets to a thrilling 99-98 win over the New Orleans Pelicans.

Jokic hit a jump shot with 16.9 seconds remaining to give Denver a one-point lead (and the win) after a Pelicans backlash in the fourth quarter.

Donovan Mitchell and Jarrett Allen each scored 24 points for the Cavs, but the Knicks posted a victory that keeps them firm in the Eastern Conference playoff hunt, one win behind the Heat.

INDIANAPOLIS (AP) — Myles Turner scored 26 points, as did Bennedict Mathurin, who added the go-ahead basket with 29.1 seconds to go as the Indiana Pacers rallied from a 21-point deficit and beat the Indiana Pacers 116-110 on Tuesday night. Chicago Bulls.

Indiana ended its worst skid of the season with seven straight losses to stay ahead of Chicago, which is 10th in the Eastern Conference. The Pacers played without injured guard Tyrese Haliburton and his replacement Andre Nembhard, who is ill.

TJ McConnell had 20 points and 10 assists for the Pacers, who have won 11 games this season while trailing by double figures.

Dominican Chris Duarte was in the starting five and finished with 11 points, nine rebounds and three assists in 27 minutes.

NEW YORK (AP) — Julius Randle had 36 points and 13 rebounds, tiebreaking the game with his eighth 3-pointer with 2:07 left, and the New York Knicks beat the Cleveland Cavaliers 105-103 on Tuesday night.

Donovan Mitchell had 24 points, eight assists and seven rebounds in his return after missing three games with a left groin strain. But the Knicks blocked his last three shots and he was slow to get to his feet after falling to the ground in an attempt to save the Cavaliers’ final possession.

RJ Barrett added 16 points and Jalen Brunson added 14 for the Knicks, who snapped a four-game skid.

Jarrett Allen had 24 points and 12 rebounds for Cleveland, while Darius Garland had 22 points and six assists.

Luka Doncic had 41 points and 15 rebounds for the Mavs. The Slovenian was still wearing the jersey he tore after missing a free throw that would have given Dallas the lead with 12.5 seconds left, when he fouled Kuzma, who was sliding down the wing.

Charlotte couldn’t recover from a bad start. The Hornets only made 6 of 23 field goals (26.3%) in the first period. Terry Rozier scored 19 points, but made just 7 of 21 shots from the field. Mason Plumlee contributed 17.