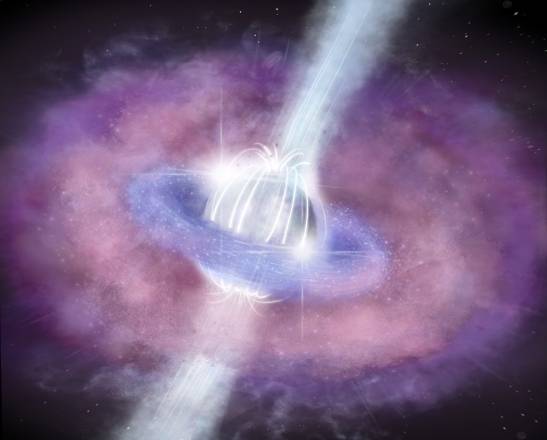 Gamma-ray bursts (GRBs) are the most energetic phenomena in the universe, detectable even if they occur in galaxies billions of light years away. Depending on whether they last more or less than two seconds, they are classified, respectively, as long (generally 10 seconds or more), associated with supernovae generated after the death of a very massive star; and short, related to kilonovae produced by the merger of two compact objects, such as neutron stars, black holes or both.

The discovery of the GRB211211A gamma-ray burst reveals that some long GRBs like this one – lasting 50 seconds – are the result of neutron star mergers, which were previously thought to produce only short GRBs.

The detection of a long GRB, lasting 50 seconds, but produced by the collision of compact objects complicates the scenario, as it shows that the classification of these bursts according to their duration does not fully correspond to reality and opens up new scenarios in the death of the stars This is GRB 211211A, detected on December 11, 2021 in a galaxy located 1,100 million light years away. Details are published in four Nature papers and one in Nature Astronomy.

“By studying the explosion, called GRB211211A, we observed clear evidence that pointed to a kilonova, produced by the merger of two neutron stars, and not a supernova, the explosion with which very massive stars end their lives” – says co-author José Feliciano Agüí Fernández, researcher at the Institute of Astrophysics of Andalusia (IAA-CSIC).

“In fact,” he adds, “the luminosity, duration, and color of this kilonova are similar to another well-known event that occurred in 2017, a neutron star merger that was the first observation of a cosmic event in light and gravity waves. ” 🇧🇷

Neutron stars are very compact, rapidly rotating objects that arise when a very massive star ejects its envelope in a supernova explosion. Their fusion produces GRBs (in principle short, but in this case long), gravitational waves and a kilonova, a phenomenon similar to supernovae but whose energy comes partly from the decay of radioactive species and which produces large amounts of heavy elements. In fact, most of the gold and platinum on Earth is believed to have formed as a result of ancient kilonovae.

The infrared signature of the kilonova

This discovery was possible in several telescopes: the Gemini twins, the Hubble, the Gran Telescopio Canarias and the Calar Alto, among others.

“However, observing in the near-infrared is technically challenging and few ground-based telescopes can do it. This discovery was made possible thanks to the twin Gemini telescopes, which showed us that we were facing a neutron star merger”, says Jillian Rastinejad, researcher from Northwestern University (USA) who leads the work.

The conclusions of this scientific team, which also used data from other telescopes such as the Hubble Space Telescope, the Gran Telescopio Canarias (La Palma) or the 2.2 meter telescope at the Calar Alto Observatory (Almeria), coincide with those obtained by other groups from Italy and China who, after studying the explosion with different approaches and observations, also concluded that the explosion was caused by a kilonova.

In addition to contributing to our understanding of kilonovae and GRBs, this discovery provides a new way to study the formation of heavy elements in the universe. There have been little discrepancies about what is known as the r-process (the fast process), which takes place in explosive stellar events and is responsible for the production of half of the elements heavier than the iron, between them and the uranium yo gold.

While at first it was thought that supernovae were the source of these elements, more recent studies favor neutron star mergers as the main producers of the heavier elements.

JC Rastinejad and others: “A Kilonova after a long duration gamma ray burst at 350 Mcf”. Eleonora Troja and others: “A long burst of gamma rays nearby of a fusion of compact objects”. Bin-Bin Zhang et al.: “A burst of long-lasting gamma rays with a peculiar origin”. Alessio Mei et al: “Gigaelectronvolt emission from a compact binary fusion“. Nature, 2022.

Salman Khan arrived as a special guest at the wedding of Pooja Hegde’s brother, see photo and video