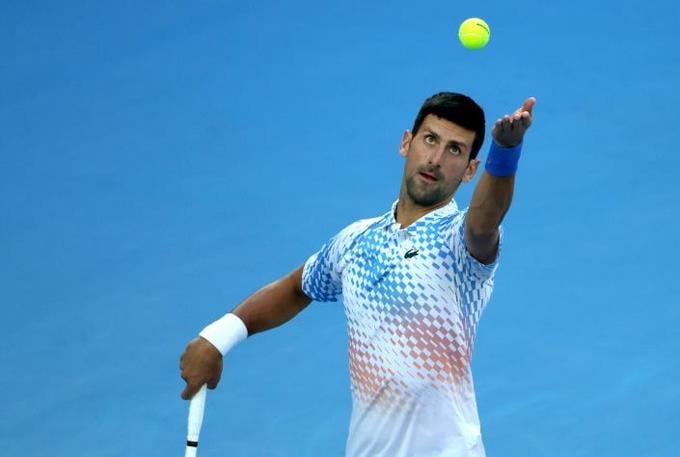 After a limping week, Novak Djokovic is back. Not resentful of his left leg injury, the Serbian star was full on Monday to advance to the quarterfinals of the Australian Open with a lesson against the last local hope.

In little more than two hours, the 35-year-old Serbian endorsed a resounding 6-2, 6-1, 6-2 against Australian Álex de Miñaur who, despite the support of the Rod Laver Arena public, could not do anything against the nine-time winner of this Grand Slam.

After three games at half speed due to the discomfort of a muscle injury in his left leg, Djokovic jumped onto the track determined to "win in three sets" and stand for the thirteenth time in the quarterfinals in Melbourne, where the Russian Andrey Rublev awaits.

"I’ve played the best game this year so far"assured the Serb. "I really wanted to win in three sets, you never know what’s going to happen on court"added "Nole"what did he say "not have felt anything" In your leg.

Although the 23-year-old Australian, with a Uruguayan father and a Spanish mother, said in the preview that he was "prepared for battle"the emotion lasted just four games, the time it took Djokovic to step on the accelerator in search of the 22 Grand Slams of the Spanish Rafael Nadal.

With a streak of four games in a row and just four points against, the Serbian closed the first set and continued the outrage in the second, in which a celebrated direct serve from De Miñaur in the sixth game prevented the rosco.

Four games in a row to start the last one sealed Djokovic’s 25th straight victory in Melbourne. "If this is the level, I think he will definitely take the title"said De Minaur, who said he had met "a Novak very close to his best version".

Rublev’s luck
In the quarterfinals he will face Rublev who, even before meeting his opponent, recognized that "no one wants to face Novak".

To top it off, as in a nod to the movie "Match Point" from Woody Allen, the game was decided with a backhand rest from Rublev who, after hitting the net, died in the field of a Rune who did not believe.

"It is probably the luckiest moment of my life. Now I can go to the casino. If I bet, I sure win"said a relieved Rublev, who had come back from 5-2 down in the final set.

The 19-year-old Dane had yet to drop a set in Melbourne, but his wrist trembled in a match that ended with 60 unforced errors and 12 double faults. "This one hurts a lot. It was very tight, I had my options" but "luck was on his side"said.

The other quarterfinal matchup in this part of the draw will be 100% American between the young Ben Shelton, the first rookie to reach this round in 20 years, and Tommy Paul, who defeated the last Spaniard in the draw, Roberto Bautista.

Seeking his second quarters in Australia after defeating the heroic Scotsman Andy Murray, Bautista was nullified against a Paul who, with direct aces, winning forehands and quick legs that reached numerous blows, ended up prevailing 6-2, 4-6, 6 -2, 7-5.

Sabalenka unstoppable
The one who does not hesitate is the Belarusian Aryna Sabalenka, undefeated in this 2023 in which she has not yet conceded a single set.

Sabalenka (No. 5) advanced to the Australian Open quarterfinals for the first time after beating Swiss Belinda Bencic, who got the first break of the match before conceding 11 of the next 14 games.

"I am very happy for this victory and for my level of play"said the 24-year-old Belarusian, who will face Croatian Donna Vekic to enter the semifinals of a Grand Slam for the first time.

Instead, like the Polish Iga Swiatek or the American Coco Gauff, the French Caroline Garcia (N. 4) joined the list of eliminated favorites after falling in two sets against the Polish Magda Linette who will face the Czech Karolina Pliskova in their first quarterfinal of a Grand Slam.

Like Swiatek the day before, Garcia attributed her poor performance to the pressure of feeling like the favorite. "I have to work on it to manage it better. My own expectations are high and I may shoot myself in the foot."said the Frenchwoman, who racked up 33 unforced errors.