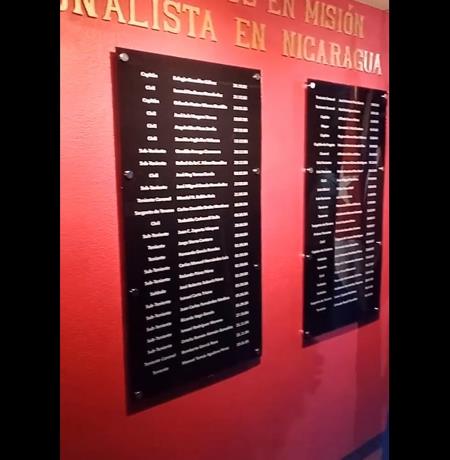 The Cuban Embassy in Managua unveiled a place of honor to 77 Cubans, including soldiers, who have died on international missions in Nicaragua, that diplomatic delegation reported this Saturday.

The seat was inaugurated at the headquarters of the Cuban Embassy in Nicaragua, in Managua, in homage to the sixth anniversary of the death of Cuban leader Fidel Castro.

"We want to thank very especially, with the greatest humility, those who quietly, but inspired by our red and black flags, embraced the idea of ​​perpetuating in the seat that we unveiled, the internationalist example of Fidel’s children on Nicaraguan soil."said the Cuban ambassador in Nicaragua, Jorge Mayo Fernández, during the ceremony, according to the official website El 19.

Representatives of the Government headed by Daniel Ortega, members of the Nicaraguan Army, and deputy Edwin Castro, head of the Sandinista parliamentary group and president of the Parliamentary Group of Friendship with Cuba, among others, participated in the activity.

"It is an act that consolidates our indestructible unity of the Cuban-Nicaraguan peoples."highlighted legislator Castro.

"With this act it is clear that we are a single country and the enormous value of internationalism is clear"he added.

Nicaragua and Cuba have maintained close relations in the periods in which the Central American country has been governed by the Sandinistas, which in a first part spanned from 1979 to 1990, and in a second that began in 2007.

Both countries are part of the Bolivarian Alliance for the Peoples of America (ALBA).