during the night of May 16, 2022 it will be possible to see a total lunar eclipse from Europe, Africa and America. The phenomenon can be seen with the naked eye, although best with binoculars or a telescope, and does not imply any danger or require any special instrumentation. Of course, this time we will have to wake up early in countries like Spain.

To see the total lunar eclipse on May 16, you will have to stay up late or wake up early in Spain as it will be visible from 04:28 to 07:55 (Spanish Peninsula Time)

According to data from the National Astronomical Observatory (NO-IGN), a entire will start in 5:29 am (Spanish Peninsular Time) and will end at 06:54, so it will last approximately one hour and 25 minutes. It will be possible to partially see the before and after, from 04:28, when the astronomical event will begin, until 07:55, when it ends.

During a total eclipse, the Moon will not be completely dark, but will take on a reddish hue. That’s because some of the sunlight is deflected by the Earth’s atmosphere. Because it is dyed red, it is sometimes popularly called blood Moon. 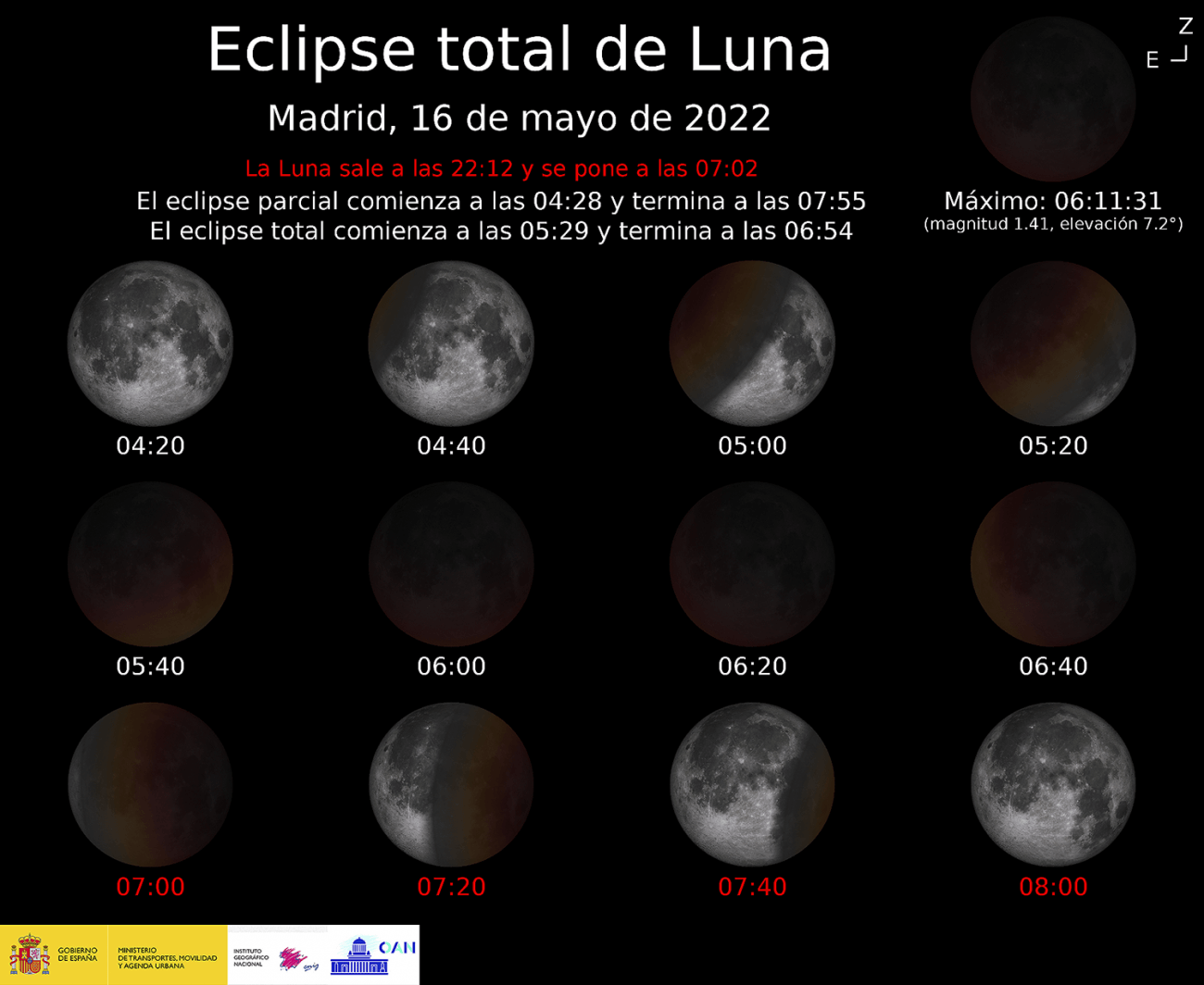 Evolution of the total lunar eclipse in Madrid. In red, the hours when it will no longer be visible because the moon will be below the horizon. /NAO-IGN

In the northeast peninsular and the Balearic Islands, the Moon sets before the total eclipse ends (this is why only the beginning of the total phase will be seen, but not the end), while in the rest of the peninsula the entire phase.

However, on the peninsula, Ceuta and Melilla, you will not see how the polarization phase ends, that is, how the Moon leaves the Earth’s shadow. This is because our satellite sets on the horizon before the eclipse ends. On the OAN-IGN website you can check the evolution of the lunar eclipse in each of the provincial capitals.

In the Canary Islands, they will be lucky enough to see the total and partial eclipse. From this community, you can follow this long-awaited astronomical event live on the channel. live sky.

“If we think that from Europe we will have to wait until March 2025 to witness another total lunar eclipse, it’s worth waking up early so we don’t miss the red moon next Monday”, says Miquel Serra-Ricart, astronomer at the Instituto de Astrofísica das Artes. Canary Islands. (IAC) that will relay the phenomenon of the Teide Observatory. 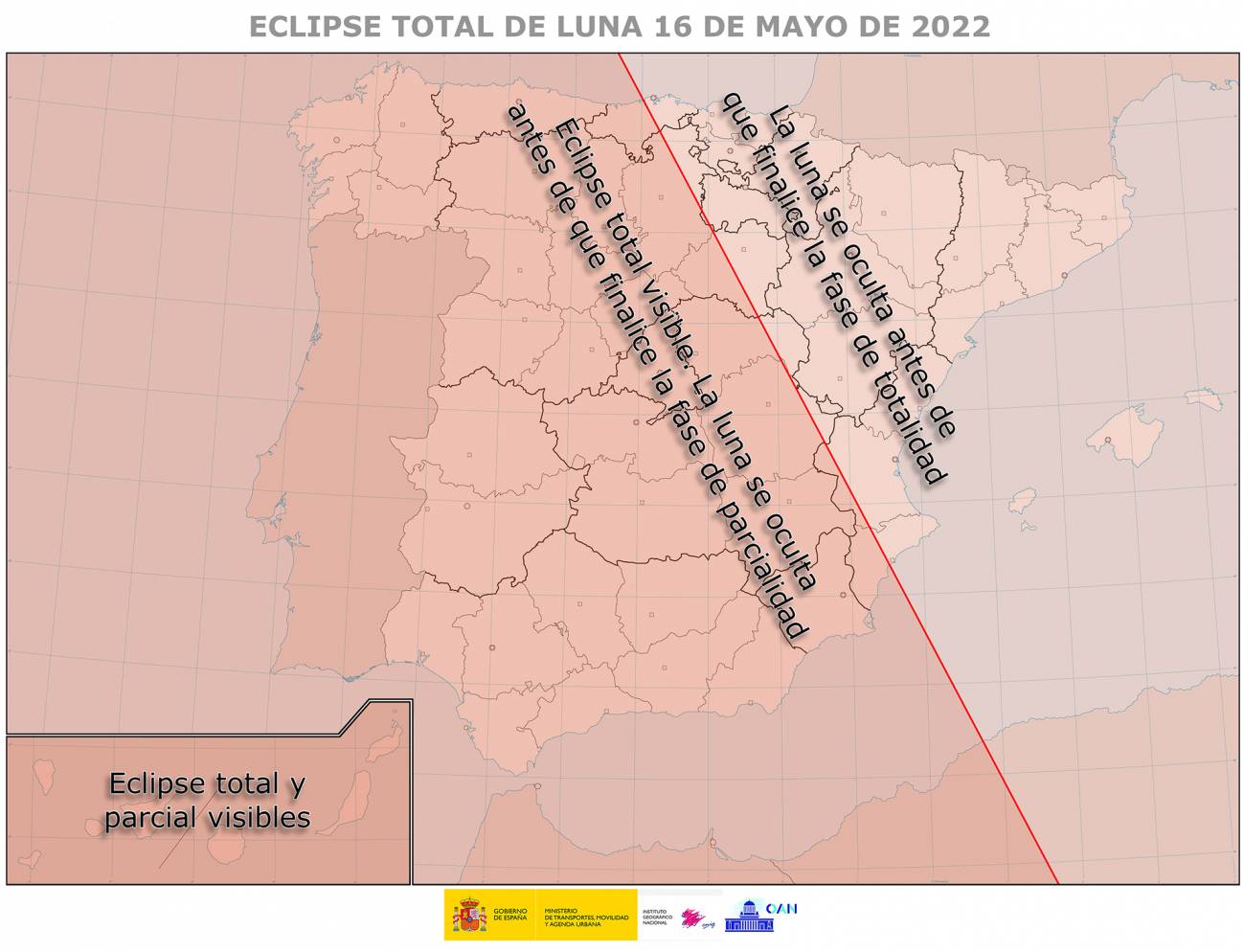 In the eastern half of the peninsula the moon will hide before the totality phase of the eclipse ends, and in the western area before the partial phase ends. In the Canary Islands, both will be visible. /NAO-IGN

On an international scale, the eclipse will be visible in one of its phases in west asiana lot of Europe, Africa, North America (except its westernmost point), South America and Antarctica.

The totality phase can be observed in southwestern Europe, central and western Africa, much of North America, South America and Antarctica.

Visibility of the lunar eclipse in the world. The zone where the totality will be visible is delimited by the inner part of the curves marked with iT and fT. /NAO-IGN

Unlike solar eclipses, which can be seen from only a relatively small part of the Earth and last for a few minutes, a lunar eclipse can be seen from anywhere on Earth where it is nighttime and lasts for several hours.

On a lunar eclipsethe Earth prevents sunlight from reaching the Moon, generating a cone of shadow that darkens the Moon, which acquires the characteristic reddish color.

Due to the angular size of the Sun, the shadow cast by the Earth consists of two zones: the umbra and the penumbra. At the shadow there is no direct solar radiation, while in melancholy solar radiation is only partially blocked.

When do eclipses happen?

The plan by which the Moon orbits the Earth (shown in blue in the figure below) is tilted 5th in relation to the plane in which the Earth (and the Moon) orbit the Sun (in yellow). As eclipses require near-perfect alignment of the three stars, eclipses occur very rarely throughout the year.

The Moon takes approximately one month to complete one revolution around the Earth, so if both planes coincided, we would have 12 eclipses of the Sun and another 12 of the Moon each year. In practice, the number of eclipses that occur each year is between 4 and 7, including those of the sun and moon.

In many cases, eclipses are partial (or even penumbral only on the Moon) and visible from a fraction of the Earth’s surface. When the Moon is close to the Sun in the sky, the phase is new moon, and there is a possibility of a solar eclipse.

When the Moon is opposite the Sun (visible all night) the phase is full moonand there is the possibility of a lunar eclipse. 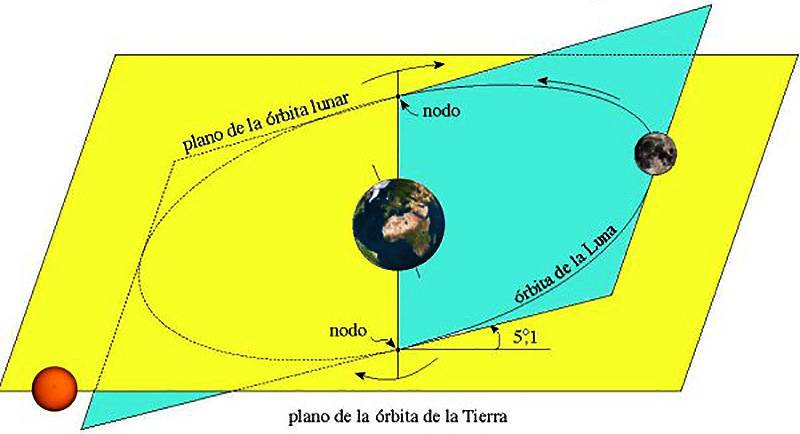 Planes of the Earth’s and Moon’s orbits. /NAO-IGN

Science trips – the best black sand beaches in the world

Pollution was responsible for nine million deaths in 2019

Discovered a beautiful red snake unique in the world