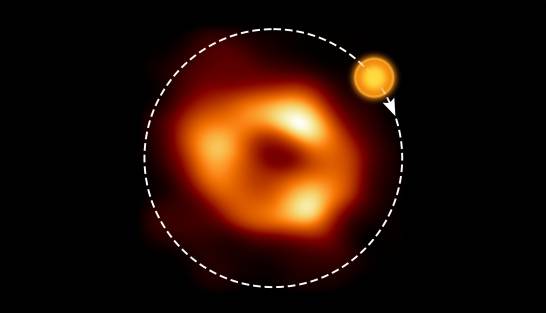 The global network of eight radio telescopes that make up the Event Horizon Telescope (EHT) this year presented us with the first image of Sagittarius A*, the black hole at the center of our galaxy. To calibrate the data, scientists in this international collaboration used the most sensitive part of the EHT, the radio telescope. SOUL that the European Southern Observatory (ESO) has in Chile, and they came across something unexpected.

“We think we are seeing a hot gas bubble gliding around Sagittarius A* in an orbit similar in size to the planet Mercury, but making a complete turn in just a few 70 minutesand that requires an impressive speed of approximately 30% of the speed of light!”, says Maciek Wielgus from the Max Planck Institute for Radio Astronomy in Bonn, Germany, lead author of the study, published this week in the journal Astronomy and Astrophysics.

This hot bubble of gas revolves around Sagittarius A* in an orbit similar to Mercury’s, but completes it in just 70 minutes, requiring a staggering speed of around 30% the speed of light!

Coincidentally, some of these observations were made shortly after a burst or burst of x-ray energy from the center of our galaxy, which was detected by the space telescope Chandra from NASA. These types of eruptions, previously observed with X-ray and infrared telescopes, are thought to be associated with so-called ‘hot spots’, bubbles of hot gas that orbit very fast and very close to the black hole.

“We were lucky that ALMA started observing Sagittarius A* shortly after the X-ray burst, caused by the heating of a gas bubble very close to the black hole,” explains the astronomer. Ivan Martí Vidal from the University of Valencia, “after calibrating the data with some new algorithms developed at our university, we realized that we had detected that enigmatic signal related to this X-ray burst.”

In turn, Jesse Vos, PhD student at Radboud University (Netherlands) who also participated in this study, points out: “Perhaps these hot spots detected at infrared wavelengths are a manifestation of the same physical phenomenon: emitting cold hotspots, they become visible at longer wavelengths, such as those observed by ALMA and EHT.”

The eruptions have long been thought to originate from magnetic interactions in the very hot gas orbiting very close to Sagittarius A*, and the new findings support this idea. “Today we are almost certain that these hot spots are related to a process called ‘magnetic reconnection‘, in which the magnetic fields transfer a lot of energy (and in a very localized way) to the material that surrounds the black hole”, comments Martí Vidal to SINC.

“We now find strong evidence for a magnetic origin of these eruptions and our observations give us a clue about the geometry of the process. The new data are extremely useful to build a theoretical interpretation of these events”, says the co-author Monika Moscibrodzkafrom Radboud University.

These hot spots appear to be related to a process called ‘magnetic reconnection’, in which magnetic fields give up a lot of energy (and in a very localized way) to the material surrounding the black hole.

ALMA allows the astronomical community to study the polarized radio emission Sagittarius A*, which can be used to reveal the black hole’s magnetic field. The team used these observations along with theoretical models to learn more about the formation of the hot spot and the environment in which it is embedded, including the magnetic field around Sagittarius A*. Relative to previous observations, this research provides stronger constraints on the shape of this magnetic field, helping to uncover the nature of our black hole and its environment.

The observations confirm some of the earlier findings made by the instrument. GRAVITY, installed on ESO’s Very Large Telescope (VLT), which observes in the infrared. The GRAVITY and ALMA data suggest that the explosion originates from a clump of gas swirling around the black hole at about 30% the speed of light. clockwise in the sky, with the orbit of the hot spot almost head-on.

As the gas bubble orbits just a few light-minutes from the black hole, it may help to better understand how matter behaves in these enigmatic regions so close to the event horizon.

“In the future, we should be able to track hot spots at frequencies using coordinated observations of multiple wavelengths with GRAVITY and ALMA – the success of such an effort would be a real milestone for our understanding of the physics of galactic center flares,” says Marti Vidal. .

Furthermore, as the bubble orbits only a few a few light minutes from the black holecan help to better understand how matter behaves in these enigmatic regions so close to the event horizon. The team hopes to be able to directly observe these clumps of gas in orbit with the EHT, to probe ever closer to the black hole and learn more about it. “We hope that one day we will feel free to say that we ‘know’ what’s going on in Sagittarius A*,” says Wielgus.

“These types of hot spots tell us about the black hole itself”, concludes Martí Vidal, and details: “Space is very curved in these regions, so the rays of light reaching Earth followed very curved paths when they were close to the hole. This means that the signals we pick up on our planet carry information about the curvature of the black hole’s space-time.”

the mystery of the loudest sound in the universe