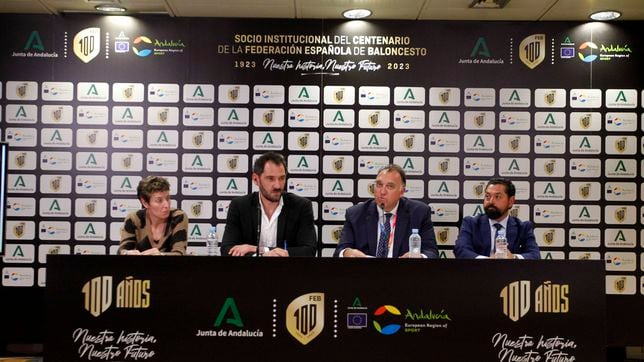 This is not another year for the Spanish Basketball Federation. The FEB celebrates its centenary in 2023, a special anniversary that rides on the successes achieved during a last summer of many carats: nine medals out of a possible nine. In all the categories in which the Selection participated, metal was played both in men and women, from the Sub-16 to the Sub-20, from the European to the World Cup, and crowned with the pleasant and unexpected gold of the boys by Sergio Scariolo in Berlin (Germany).

And it didn’t stop there. The classification with two games to go for the World Cup next summerwhich will be held from August 25 to September 10 between the Philippines, Indonesia and Japan, in which Spain will defend the laurels won in 2019, and the first position in the FIBA ​​ranking for the first time in its history they raised even more the moment of grace of Spanish basketball.

“I did not imagine reaching the centenary like this,” confessed Jorge Garbajosapresident of the FEB, during the presentation ceremony of the celebrations of these 100 years of history that the Federation is going to celebrate in style with Andalusia, your institutional partner for this birthday, as the nerve center.

Everything will start in March with the FIBA ​​Europe Board, which will take place on the 17th and 18th of that month in Seville. Next, it will be time for the ball with three friendly tournaments of a superlative level. On June 2, 3 and 4, the women’s team will face Belgium and Turkey in Córdoba; Y the On August 11, 12 and 13, the men’s tournament will take to the court in Malaga to face two giants of world basketball: Luka Doncic’s Slovenia and the United States, the great intercontinental ogre. One day before the party begins at the Martín Carpena, the IV Spanish Basketball Gala will take place in Malaga.

Scariolo’s team will have another tournament to remember as part of the preparation tour for the World Cup in Granada, don August 17 to 19, against the Argentina of Facundo Campazzo, Gabriel Deck, Luca Vildoza… and a Canada full of NBA stars (Shai Gilgeous-Alexander, Andrés Wiggins, Jamal Murray…). Lots of dynamite to prepare for the Asian date. “It is a high-level preparation and we want to have another level match that attracts the usual fans and also the non-regulars,” said Garbajosa. The final point, the traditional Spanish basketball Hall of Fame gala in October, which will be held for the third consecutive year in Seville in collaboration with AS.

“It is the most important year of the future of our basketball. The illusion we have today is difficult to express. We have a lot of responsibility”, continued Garbajosa, who praised the excellent relationship between the FEB and the Junta de Andalucía: “Our communion is obligatory and playing in such iconic places… We have forged a magnificent working group: the collaboration between the two is not due to a sudden attraction, we have been together for some time now, although the depth of our relationship has increased over time”, said the federation president, who was accompanied by Arturo Bernal, Councilor for Tourism, Culture and Sports of the Board: “This is a special day because the centenary events are going to be held in Andalusia, which comes at the best time in history for Spanish basketball”, Bernal said about some festivities that will not only be part of the history of Spanish basketball, but also of its future.

Bale and Gasol step onto the green

After Saudi Arabia, UAE also closed its embassy in Afghanistan