The past week has been a rough one for cryptoland. Almost the entire market was red again. In particular, a number of technical indicators have given important signals. Here are the three most important things we learned about Bitcoin (BTC) thanks to last week.

Yes, we know: moving averages are quite simple and they say little about what the future will bring. Yet they are quite important. Like regular trendlines, they give a clear picture of whether a trend is going to end or not. If we look at the 100-weekly moving average for Bitcoin, we see that the BTC dollar price has clearly fallen through the moving average. Bitcoin is currently doing better against the euro, although BTC/EUR has also passed its support. However, that didn’t happen until one weekly candle later. At the time of writing, the bitcoin euro price is €29,715 on Bitvavo. 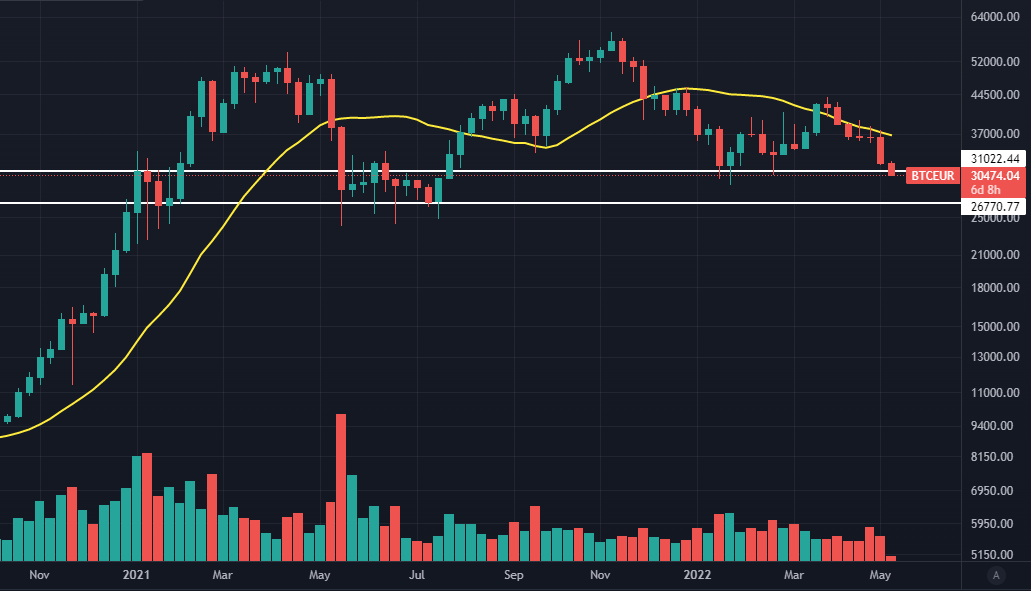 2: Candles and volume do not indicate a bottom

Also from the individual candlesticks we can conclude the necessary. For example, all weekly candles have been red since the week of March 28, and since then the candles of shorter periods have also shown that bitcoin is in a downward trend. Certainly the weekly candles go down quite gradually. They are not waterfall drops that indicate exhaustion, but candles that are occasionally unable to rise above the resistance to break out.

The volume also indicates that the bottom is not yet in sight. There is almost no volume. That doesn’t make sense for a downtrend coming to an end. That is, if the price is not pushed up by large buyers. Especially with cryptocurrencies, bottoms often have a huge peak in volume. As long as the volume remains low, it is obvious that the trend will continue downward.

Still, the sentiment is so negative that we have to ask ourselves whether the bottom is not very close. As we described this morning, the Fear and Greed Index is at an all-time low. This usually indicates that at least a significant bottom is underway. Everyone sits on one side of the ‘boat’. People will move to the other side of the boat, causing price increases.

At the same time, the strong support line can also be negative. The very last support line is only 20% away from the current price. If that breaks, the next support will be the top of 2017 – that is 11,000 euros. That’s a hard drop.

wow! We all know the Fear & Greed Index being in extreme fear does not necessarily mean a bottom. But to get a score as low as 11 is very rare.

Arrows on the chart show previous scores of 11 or lower.

Davos forum: it is urgent to tax the rich, according to the NGO Oxfam

RATP: major disruptions on buses and trams scheduled for Monday due to a strike